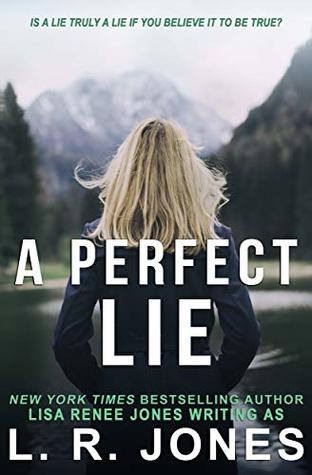 Review:
L. R. Jones takes what is happening right now in the world brings a twist in a way readers will be able to sink their teeth into.
A perfect Lie is a story that is more puzzle than mystery.  Readers will be pieces each part together as the characters move though their lives. The story comes across as a journal that readers will not be able to figure out until the author is ready to unveil it.
This is the perfect book for readers who love mystery puzzle with a political twist.
Thank you to Netgalley and the publisher Julie Patra Publishing for the advance copy of L.R. Jones A Perfect Lie

Synopsis:
They say that you are not a product of the environment that you’ve grown up in, that you create your own story, tell it your way. That you get to pick your own future. They lied. If you’re honest with yourself, you believed that lie, too, like I used to, because I wanted to, and even needed to believe that I had some semblance of control over my own self. The truth is that control is part of the lie. The ability to become a person of our own making is the perfect lie. I concede that it might appear that some people control their destiny, but I assure you, if you gave me fifteen minutes, I could pull apart that façade. We are born into a destiny that we never have the chance to escape. That’s why I must tell my story. For those of you out there like me who were told that you have choices, when you never had one single choice that was your own. For those of you out there who were, who are, judged for decisions you’ve made that were directed by your destiny, not by the façade of choices. The irony of the story within this story is how one person’s predisposed destiny can impact, influence, and even change the lives of those around him or her. How one destiny ties to another destiny.
I am Hailey Anne Monroe. I’m twenty-eight years old. An artist, who found her muse on the canvas because I wasn’t allowed to have friends or even keep a journal. And yes, if you haven’t guessed by now, I’m that Hailey Anne Monroe, daughter to Thomas Frank Monroe, the man who was a half-percentage point from becoming President of the United States. If you were able to ask him, he’d probably tell you that I was the half point. But you can’t ask him, and he can’t tell you. He’s dead. They’re all dead and now I can speak.

New York Times and USA Today bestselling author Lisa Renee Jones is the author of the highly acclaimed INSIDE OUT series. Suzanne Todd (producer of Alice in Wonderland) on the INSIDE OUT series: Lisa has created a beautiful, complicated, and sensual world that is filled with intrigue and suspense. Sara’s character is strong, flawed, complex, and sexy – a modern girl we all can identify with.
In addition to the success of Lisa’s INSIDE OUT series, she has published many successful titles. The TALL, DARK AND DEADLY series and THE SECRET LIFE OF AMY BENSEN series, both spent several months on a combination of the New York Times and USA Today bestselling lists. Lisa is presently working on a dark, edgy new series, Dirty Money, for St. Martin’s Press.
Prior to publishing Lisa owned multi-state staffing agency that was recognized many times by The Austin Business Journal and also praised by the Dallas Women’s Magazine. In 1998 Lisa was listed as the #7 growing women owned business in Entrepreneur Magazine.
Posted by H. Wimmer at 12:00 AM