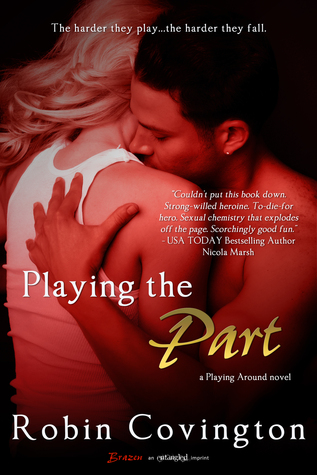 Playing The part is a your cheesy romance but has some truth about being in the public eye and how your are judge without anyone know who you really are and the struggles you face.
With that being said the story lacks character development. When the female lead Piper is introduced as strong but falls apart when the handsome leads wants into the room it makes you realize she is weak and lacks any time of strength.   It story would have more fun if Piper had more spunk and less blah.
The male lead Mick is boring lacks any type of sympathy and he is nothing more than a neanderthal who doesn't change or develop.
The book had sex in it that doesn't really do anything but get the reader all hot and heavy.  It doesn't add to the story because their isn't much of a story there to being with.

Thank you to Netgalley and the publisher Entangled: Brazen for an advance copy of  Robin Covington Playing The Part

Synopsis:
After publicly self-destructing over a heartbreak a year ago, bestselling romance writer Piper James is now making nice with her publisher by agreeing to teach Hollywood's favorite action star how to act like he's in love. Only playboy Mick Blackwell has no clue what love looks like. When a seductive heat ignites between Piper and Mick, she jumps at the chance for a bit of fun between the sheets, but with two stipulations: she's kept out of the public eye and things end when she returns to New York. Only Mick keeps changing the rules on her. Tempted by America's favorite bad boy, Piper is wondering how far she's willing to bend.

A USAToday bestseller, Robin Covington loves to explore the theme of fooling around and falling in love in her books. Her stories burn up the sheets. . .one page at a time. When she's not writing she's collecting tasty man candy, indulging in a little comic book geek love, hoarding red nail polish and stalking Chris Evans.A 2016 RITA® Award nominee, Robin's books have won the Golden Leaf Award and finaled in the Romantic Times Reviewer's Choice, the Book Seller's Best and the National Reader's Choice Awards. She lives in Maryland with her handsome husband, her two brilliant children (they get it from her, of course!), and her beloved furbabies, Dutch and Dixie Joan Wilder (Yes - THE Joan Wilder)