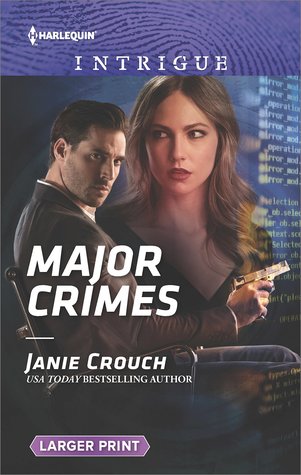 Review:
Since this is story is part of a ongoing series I was able to pick up the story pretty fast.  The story is your basic romance with action mixed in. The characters are likable enough that if readers had started from the beginning of the series they would be more attached to the different characters mentioned though out the book.
The story moves at a fast pace will make it a fun fast read for the summer pool.

This story is a stand alone but to really enjoy the story readers should start at the beginning.
Thank you to Netgalley and the publisher  Harlequin Intrigue for the advance copy of Janie Crouch Major Crimes.

Synopsis:
Working together would bring down a killer

But her secrets could tear them apart…

Hayley Green never wanted to see Omega special agent Cain Bennett again. Ever. He seduced her, then sent her to prison for hacking, and Hayley’s only just started piecing her life back together. Except now Cain needs Hayley’s help to catch a murderer. Their past is colliding with their still-smoldering attraction…and the only thing more dangerous than the killer is the secrets Hayley’s been keeping.

USA TODAY bestselling author Janie Crouch writes what she loves to read: passionate romantic suspense. She is a winner and/or finalist of multiple romance literary awards including the Golden Quill Award for Best Romantic Suspense, the National Reader’s Choice Award, and the coveted RITA© Award by the Romance Writers of America.Janie recently relocated with her husband and their four teenagers to Germany (due to her husband's job as support for the U.S. Military), after living in Virginia for nearly 20 years. When she's not listening to the voices in her head (and even when she is), she enjoys engaging in all sorts of crazy adventures (200-mile relay races; Ironman Triathlons, treks to Mt. Everest Base Camp) traveling, and movies of all kinds. ​Her favorite quote: "Life is a daring adventure or nothing." ~ Helen Keller.
Posted by H. Wimmer at 12:00 AM