Review:
I will have to start off with that Paranormal Romance is a genre that I have avoided because I can't seem to wrap my mind around demons, werewolves, witches, and things that go bump in the night. Jen Winters introduced something a little different which I found interesting Guardians.

Guardian is person God has appointed to keep people safe from evil or other things that go bump in the night. She lead female character protects people who will achieve or their family might achieve greater things. Demons will ride on their shoulders causing the person to feel all is lost losing their direction.  Jen Winters starts the book off with a bang showing you Geneva Archer abilities to protect humanity. Jen Winter also does an amazing job of helping the reader to understand how lonely being immortal can be knowing the second someone turns their back they will never remember you.

Kissing Demon bring so many different biblical characters making it really fun but sometimes a distraction from the story and I would find myself hoping for the final battle.  Kissing Demon has all the makes of an episode of Buffy The Vampire Slayer with evil characters trying to rule the world and the good trying hard to stop that from happening while making the greatest sacrifice.

Everything you can think of when it comes to paranormal is in this book from time traveling, dreamscapes, demons, werewolves, witches men and women thousands of years old and so much more. I felt the story slowed down with the introduction of so many different characters that sometimes I would get a little lost as to who they were. I understand in this world there would be so many characters but sometimes I felt a little lost.

As I finished the book my thoughts kept coming to the same thing with a good editor Kissing Demon has great potential of being a great paranormal romance. The sex in the book caused the story to slow down almost coming to a stop. With that being said I have only read a handful of paranormal romance books  so this could be normal for this genre. I feel an editor could help the book create a more constant flow instead of the staccato that would happen with the fight scenes but slow way down to a snails pace during the sex scenes.

I am curious to read what plans Jen Winters has for her next book will it stay on the story of Geneva and Alex? creating more background? or will the Author focus on several of the different characters that she introduced though out this book.

This book as great potential with the help of an editor. I didn't find spelling and grammar errors that I normally find in lot of Indie Authors.

Synopsis:  Guardian Geneva Archer might be more infamous than famous among the supernaturals in Ft. Worth, but when a sexy werewolf enters her territory, she finds herself face to face with her worst fear: save humanity or save her soulmate?

After 800 years of guarding humanity from the things that make your hair stand on end in the dead of night, Geneva Archer is given a two-week vacation to work out her feelings of loneliness and refresh her spirit. With time on her hands, she goes to her favorite club: a place for supernaturals to gather without worrying about human interference. While there, she meets Alex, a compelling werewolf with a demonic side. But instead of blasting him back to hell like her instincts would normally tell her to do, Geneva falls head over heels.

For Alex, Geneva is an answer to prayer. She can free him from the most notorious demon walking the earth—his father. Yuruch isn’t interested in his offspring’s life, just his body—the perfect body for a demon to inhabit. With Alex’s body and powers, Yuruch will become nearly invincible, able to wreak his hellish destruction on humanity from an impenetrable fortress.

In order to get his hands on Alex, Yuruch kidnaps one of Geneva’s sisters, luring both her and Alex into an ambush. After the botched rescue mission, Alex is possessed by Yuruch, leaving Geneva with a dead sister, a destroyed city and no way to get her soulmate back without giving Yuruch everything he desires.

Can Geneva figure out a way to defeat Yuruch and save Alex without sacrificing the very best of humanity in the process? Does she even want to? 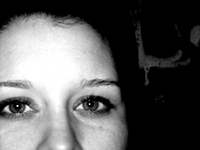 Author Information:   Jen Winters fell in love with paranormal romance after her daughter was born and she needed a way to escape reality for a few minutes a day. She loved it so much she decided to take her own pen to it. The world of the Guardians was developed through deeply irreligious conversations with her father who likes to misinterpret scripture as often as humanly possible and a good dose of did-I-just-read-that-! when looking into ancient near eastern mythology and scripture.