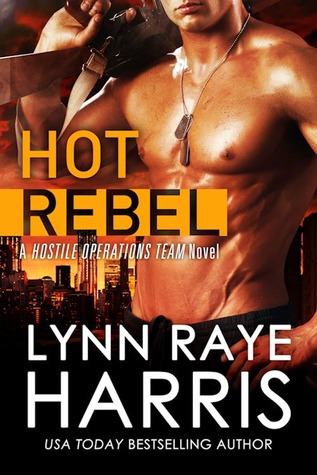 Title: Hot Rebel
Author:   Lynn Raye Harris
Rating: Stars 5 out of 5
Review:
I was given an Advance Copy of Lynn Raye Harris Hot Shot and found I enjoyed the book so much when her next book was released I thought why not read it. So I took a chance and boy I am glad I did because I really enjoy Hot Rebel with the feisty heroine Victoria Royal and HOT's Nick "Brandy" Brandon.
Victoria Royal is a traitor or at least to the U.S. government says she is a traitor. According to Victoria she is a gun for hire after she was thrown out of the army as a sniper. She now uses her skills to find her sister who disappeared  while she was in the army.
Nick Brandon is a sniper who is ready to make his kill shot but instead of everything goes as planned another sniper takes out the wrong target sending Nick and his partner running to save their hides. He meets Victoria and remembers her from Sniper Training school and her sassy mouth. Nick is trying to figure out if she is a traitor and who she is really working for because no one at HOT's can figure out who Ian Black really is.
Snipers, near death experiences, romance, lots of action and a cliffhanger that has the reader wanting more. Lynn Raye Harris wrote a book I couldn't put down not matter how late into the night I read. Nick and Victoria have the perfect amount of flaws to make the story believable but not enough to put the reader off.  Nick is an alpha male who knows that Victoria can take care of herself and never second guess her decision once they start working together. Which makes him less annoying than others where you want to hit the guy and let the girl take the lead.
Lynn Raye Harris wrote a novel where the book isn't all about romance/sex but has a great plot that moves forward leaving the reader wanting more when it ends.  The story bounces between Nick and Victoria perspective with just glimpses on what is going on with HOT. Never once did I feel lost or distracted by the other view points in the story. This is the 6th book in a series but just like her last book it can stand alone with out the reading getting confused.
In a nutshell there is never a dull moment in this book; where loyalties are questioned (Who really are the bad guys), bullets fly and passion erupt.
I would recommend this series to anyone who loves military action with romance and try not to let the HOTS in the title turn you away.

Victoria Royal is a traitor. Or so the U.S. government believes. Victoria was once a promising sniper in the Army, but now she’s gone rogue—worse, she’s just landed in the middle of a Hostile Operations Team mission in the desert and blasted it all to hell.

Nick “Brandy” Brandon doesn’t expect to run into Victoria when he’s bugging out from a mission gone wrong. It’s been more than three years since she disappeared from the sniper course they were in together, and he’s finally stopped thinking about her killer curves and smart mouth.

But now she’s back—and she’s far more dangerous than Nick ever believed possible… Is she really a traitor? Or is there something more at stake? He has to decide fast—because time’s running out and too many lives hang in the balance…

Author Information:  USA Today bestselling author Lynn Raye Harris burst onto the scene when she won a writing contest held by Harlequin. A former finalist for the Romance Writers of America's Golden Heart Award and the National Readers Choice Award, Lynn lives in Alabama with her handsome former military husband and two crazy cats. Lynn writes about hot military heroes, sizzling international billionaires, and the women who dare to tame them. Her books have been called "exceptional and emotional," "intense," and "sizzling." To date, Lynn's books have sold over 2 million copies worldwide.

You can learn more at her website, www.LynnRayeHarris.com, or come and visit her at her Facebook page: http://www.facebook.com/AuthorLynnRay.... Lynn loves hearing from her readers!

Other Review:
Book Mood
Posted by Unknown at 12:00 AM