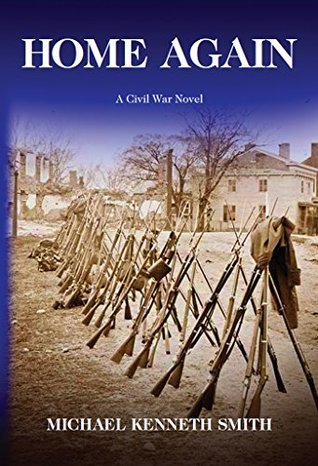 Review:   This is an excellent book, a good story and a great way to tell the story!  Michael has used a format to tell what the war was like for two young boys who briefly met one day before the war started and later met again during a crucial point in their lives and in the life of their country.

Michael tells the story from the view point of each boy both about 16 when they leave home and family to find glory, excitement and fame in this horrible destruction.  They find out very quickly that it is not glory and excitement but blood, death, pain, misery and hopelessness.

Zack is a boy that goes to fight for the Union and Luke fights for the Confederacy.  From the pretext of the story I do not feel that either boy felt strongly which side they fought for.  Ideological differences didn’t seem to make any difference to them,  it seemed they just happen to fall in with which ever group was convenient at the time.

Zack’s parents did not want him to go as on the other hand Luke’s parents basically told him he had no choice but to go.

What the boys learn on their long road to adulthood is what this book is all about.  The lessons are hard and come at a very great price for both boys!

Michael tells their stories and adds a great deal of historical background to the novel that works well for the stories he is portraying.

I would have liked to have seen his characters fleshed out a bit more so I would have felt more of a bond with them and the trials they were going through.   As it was I felt a bit like I was reading a biographical sketch of their lives and trials during the war, rather than being emotionally invested in what happened in their lives.

Michael is a great story teller and I believe he will continue to enhance his style of writing with each new tale. I am looking forward to his next novel which I am sure is in the offing!

Thank you Eileen for this review .

Synopsis:The nation is divided, and a bloody Civil War looms on the horizon. Two young men enlist, each with very different strengths, weaknesses, and reasons for service. They end up on opposite sides of the battle, though, in the end, they learn largely the same lessons about honor, human nature, and the horrors of war.

Before the Civil War had even begun, these young men, Zach and Luke, had already crossed paths while fishing in eastern Tennessee. After they parted ways, they never expected to later be pitted against each other in war—but, when Zach joined the Northern cause and Luke joined the Southern, that’s exactly what happened.

On the battlefields, each boy learns invaluable lessons about himself, and both contribute to the outcome of battles and, ultimately, to the war. Their lives are forever changed by all that they encounter, but their story does not alter the actual course of history in any way.

Home Again is a rare piece of historical fiction that recounts Civil War experiences in strict compliance to recorded historic detail. Yet as historically accurate as it is, it is also incredibly insightful and compelling, and is sure to entertain both your heart and your mind.