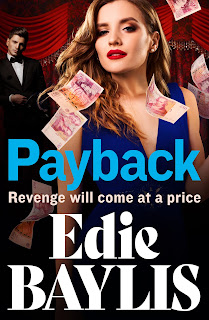 This is the first book in the Allegiance series as well as a first-time reading Edi Baylis. That being said I was a little lost as I started reading Payback and found I needed to get into the swing of things.

The plot, characters, action, and romance work well in this story.  It doesn't stand out in the romantic suspense that I have read in the last year but it's not a back read either.

Thank you to Netgalley for a copy of Edie Baylis PayBack.

With his once thriving casino business now in ruins, Seb Stoker is certain about two things: One – he will rebuild bigger and better than ever. And two – someone will pay for torching his club.But until that day comes, Seb has bigger things to worry about and a business deal that could make or break them all…Sam Reynold knows Seb is out for revenge, and she’ll do anything she can to help him. But Sam has her own enemies and battles to fight – ones much closer to home.

has met a lot of interesting people - several of whom have supplied ideas for some of the characters in her books! She has now settled back in central England with her partner and children, where she is pursuing her writing.Edie writes gritty gangland fiction and is currently signed to Boldwood Books for a 5-book series set in Birmingham. The latest and third in the series is due to be released in September 22.Edie's other series are the Retribution series, the Hunted series and the Downfall series - all trilogies.When she isn’t writing, Edie enjoys reading and is a self-confessed book hoarder. She also enjoys crochet and music as well as loving anything quirky or unusual.For all news and updates and to join Edie's mailing list, visit www.ediebaylis.co.uk or follow Edie on Twitter @ediebaylis or Facebook