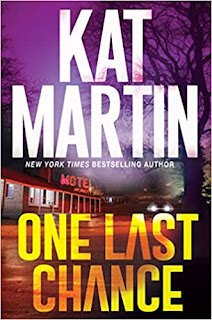 Kat Martin is an author who is able to write a series that can all be read as a stand-alone novel or read as a series. The author is able to bring her world to life with romance, characters who readers can fall in love with and of course an ending that everyone will love.

One Last Chance has to character who have military background who are both strong, smart, and will do anything to help each other find a missing loved one. The romance, sexual tension is perfect a combination with the action pack moments in One Last Chance.

One Last Chance is a perfect addition to Blood Ties Series and well worth diving into the series.

Thank you to netgalley for advance copy of Kat Martin One Last Chance.

Former Green Beret Edge Logan has made a new life for himself at Nighthawk Security in Denver, using his finely honed skills to neutralize threats of all kinds. When he overhears friend and fellow agent Skye Delaney discussing a new case involving her missing sister and a mysterious cult, he offers himself as backup. With her own military background, Skye is gutsy and more than capable, but a cult like Children of the Sun is too risky for anyone to investigate alone.Skye is grateful for Edge’s experience, even though she is aware of the attraction simmering between them. Her battle scars make her reluctant to get involved with anyone, much less a coworker—even a warrior like Edge. But infiltrating the cult’s compound is more complicated than expected—and something much more sinister than worship is clearly going on behind its walls. As the pair works against the clock to unearth high-stakes secrets, the personal barriers between them begin to crumble. Together, can they unmask the face of evil before their time runs out?

Kathleen Kelly was born on 14 July 1947 in the Central Valley of California, USA. She obtained a degree in Anthropology and also studied History at the University of California in Santa Barbara. She was a real estate broker, when she met her future husband, Larry Jay Martin. A short time after the two became acquainted, Larry asked her to read an unpublished manuscript of an historical western he'd written. Kat fell in love with both the book and the author! Then, after doing some editing for him, she thought she'd try her own hand at writing. She moved on to become a full time writer.Published since 1988, she singed her books with her married name, Kat Martin, but she also used two pseudonyms: Kathy Lawrence for a book in collaboration with her husband Larry Jay Martin, and Kasey Mars for her first contemporary romances. The New York Times bestselling writer, among her many awards, has won the prestigious RT Book Review Magazine Career Achievement Award. To date, Kat has over eleven million copies of her books in print. She has been published in seventeen foreign countries, including England, South Africa, Spain, Argentina, Germany, Italy, Greece, Norway, Sweden, Russia, Bulgaria, China, and Korea.Currently residing with her husband, a Western-writer and photographer, in Missoula, Montana, USA. But when they are not writing, they also enjoy skiing and traveling, particularly to Europe."I've always loved books. I was an avid reader, with any number of my own stories rolling around in my head. Writing them down seemed a logical step.""I love anything old," Kat says. "I love to travel and especially like to visit the places where my books are set. My husband and I often stay in out-of-the-way inns and houses built in times past. It's fun and it gives a wonderful sense of a by-gone era."