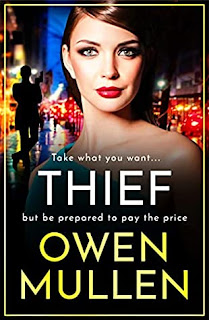 I am not sure if it is because I started in book 4 of the Glass family series or maybe it the writing style of the author.  I found it difficult to understand the reason of why Charly is who she is.  I felt it lack enough background for this reader to under Charley and her choices she made.  The story moves quickly, and the beginning starts off with murder and a hurricane.

The family dynamitic is interesting and they will protect those they call family.  Luke the oldest tries to keep everyone safe and protected but know when he might not be able to protect his family the way they need.

The action parts are exciting and hard to stop reading.  The basic story made it difficult, and I am guessing it is due to starting on book 4.

Thank you to Netgalley for an advance copy of Owen Mullen Thief.

It takes a thief to catch a thief…Charley Glass arrived in her family’s lives like the hurricane she'd escaped. But she hadn't run far enough: the ruthless Giordano family are on her tail and want two things - her life, and the return of the property she stole from them. No matter how many bodies stack up.After years of longing, Charley finally has the family she’s always wanted, but now she’s going to have to tell them the real reason she came looking them. There is only one way she’s going to stay alive, and that is to employ the muscle of the notorious Glass Family.The head of the family, Luke, has become embroiled in a dangerous political plot and isn't sure they're strong enough to take on one of New Orleans' biggest crime gangs. But he'd put his life on the line to protect the empire they've built - even if they’ll have to take on an enemy hurting enough to cross an ocean for revenge.

Owen Mullen graduated from Strathclyde University, moved to London and worked as a rock musician, session singer and songwriter, and had a hit record in Japan with a band he refuses to name; Owen still loves to perform on occasion. His great love for travel has taken him on many adventures from the Amazon and Africa to the colourful continent of India and Nepal. A gregarious recluse, he and his wife, Christine, split their time between Glasgow, and their home away from home in the Greek Islands where all of his crime thrillers were created.