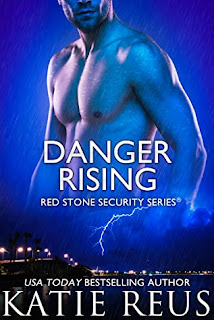 I will admit I am a sucker for Katie Reus Red Stone Security series. The books are very predictable, with a simple structure quick action while introducing the characters in the story. readers will know who the bad guys and what they have done to make them evil.  The good guys are always right there front and center.  The stories are filled with sexy time, romance, fighting, action and two people looking for their partner in life.

Lana and Teague are fun to read with simple love story mixed into action, robbing and romance. Readers will love Lana and her reason for getting back at the bad guy.

Danger Rising can be read as a stand-alone or part of the series of Red Stone. Katie Reus knows her audience and what they expect from her, and they will not be disappointed.

Thank you to Netgalley and the publisher for a copy of Danger Rising.

She’s going after what’s hers. When Lana’s mom died, she was heartbroken. And when her mom’s business partner stole a priceless family heirloom, she vowed to get it back. The former thief has no problem taking what’s hers—except this time she ends up stealing more than she bargained for. Now Lana is in possession of dangerous information, the kind that could get her and anyone she cares about killed. When the man who broke her heart shows up offering to help—a man she thought was dead—she accepts. But only because she needs a trained partner to pull off her next job. And this time she’ll protect her heart at all costs. Teague already broke it once. She won’t let him in again, no matter how much he tempts her.And it could get her killed. Black Ops agent Teague has been watching Lana from the shadows for months. It killed him to keep his distance but he couldn’t let her know he was alive until he was sure it was safe—until his enemies were dead. But now she’s in grave danger and she’s his to protect, always has been. He never got over Lana; she’s in his blood. He’s just got to prove she can trust him—and convince her to give him a second chance. But first they’ll have to work together to stop a monster—and outrun the people who want them dead.

She fell in love with romance at a young age thanks to books she pilfered from her mom's stash. Years later she loves reading romance almost as much as she loves writing it. However, she didn't always know she wanted to be a writer. After changing majors many times, she finally graduated with a degree in psychology. Not long after that she discovered a new love. Writing. She now spends her days writing paranormal romance and sexy romantic suspense.