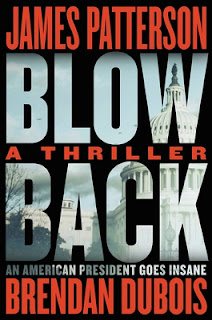 This is my first James Patterson book that isn't for grade school children.  I know but this grade schoolbooks are so much fun to read to kids.

Blowback is a very on the nose of current political climate with a narcissistic President believes that he is doing everything to protect the country he loves.  US President Keegan Barrett CIA agents to take down his enemies as the people around him are getting sick.

After the first 1\2 of the book starts off slow filled with backstories and information on all the important characters that will play major roles in the story.  After that the action, mystery start to come to life keeping readers hooked. Even with a few too many plot holes this story will keep readers ready for what is next with these two authors.  If this book had been written 5 or 6 years ago, I would have called it silly idea.  However, at times this story hits very close to home.

Thank you to Netgalley for an advance copy of Blowback by James Patterson and Brendan DuBois.

US President Keegan Barrett has swept into office on his success as Director of the CIA. Six months into his first term, he devises a clandestine power grab with deadly consequences.

Barrett personally orders CIA agents Liam Grey and Noa Himel to execute his plan, but their loyalties are divided. The CIA serves at the pleasure of the president, yet they’ve sworn to support and defend the Constitution of the United States against all enemies, foreign and domestic.

When the threat comes directly from the Oval Office, that’s where the blowback begins.

The son of an insurance salesman and a schoolteacher, Patterson grew up in Newburgh, New York, and began casually writing at the age of nineteen. In 1969, he graduated from Manhattan College. He was given a full-ride scholarship to Vanderbilt University’s graduate program in English. He left Vanderbilt before getting his PhD due to complications involving the Vietnam War.

Instead, he moved to New York to become a junior copywriter for the advertising agency J. Walter Thompson, eventually becoming CEO of its North American company.In 1976, while still working for J. Walter Thompson, Patterson published his first novel, The Thomas Berryman Number, with Little, Brown and Company. After being turned down by thirty-one publishers, it won the Edgar Award for Best First Novel. Patterson’s 1993 novel, Along Came a Spider, his first book to feature Alex Cross, was also his first New York Times bestseller in fiction.

Is the award-winning author of twenty novels and more than 150 short stories. His novel, "Resurrection Day," won the Sidewise Award for Best Alternative History Novel of the Year.In addition to his thrillers, Brendan DuBois is the author of the Lewis Cole mystery series.He is currently working on a number of writing projects with New York Times bestselling author James Patterson,He is also a one-time "Jeopardy!" gameshow champion, and a co-winner of the trivia gameshow "The Chase."