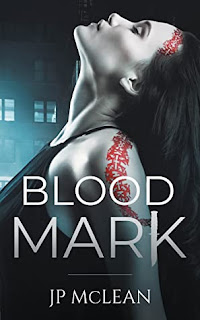 Never judge a book by the cover or the blub.  This blub had me excited I hadn't read a book by J.P. Mclean, so I wasn't sure what to expect.

The story wasn't what I expected the author writing style was to jump from different point of views within the same chapter and at times from paragraph to paragraph.  Can cause confusion for some reader and turn off others.

The story as a whole was interesting but not enough to get past the fact it is in need of more editing to help the flow of the story to keep readers from dropping off at about 25% mark in the story.

Thank you to Netgalley for the advance copy of Blood Mark by J.P. McLean.

Abandoned at birth, life has always been a battle for Jane Walker. She and her best friend, Sadie, spent years fighting to survive Vancouver’s cutthroat underbelly. That would have been tough enough without Jane’s mysterious afflictions: an intricate pattern of blood-red birthmarks that snake around her body and vivid, heart-wrenching nightmares that feel so real she wakes up screaming.After she meets the first man who isn’t repulsed by her birthmarks, Jane thinks she might finally have a chance at happiness. Her belief seems confirmed as the birthmarks she’s spent her life so ashamed of magically begin to disappear. Yet, the quicker her scarlet marks vanish, the more lucid and disturbing Jane’s nightmares become—until it’s impossible to discern her dreams from reality, and Jane comes to a horrifying realization:The nightmares that have plagued her since childhood are actually visions of real people being stalked by a deadly killer. And all this time, her birthmarks have been the only things protecting her from becoming his next victim.

I'm very fortunate to live in a writer's paradise on one of the small northern Gulf Islands off the eastern shore of Vancouver Island, British Columbia. The rugged beaches and towering fir and arbutus trees that surround me often end up in my stories. When I'm not pouring my imagination into my computer, I'm futzing in gardens, making a mess of the kitchen or hiking local trails. I write stories that entice you to believe the impossible and escape the everyday for a while. Enjoy the read!