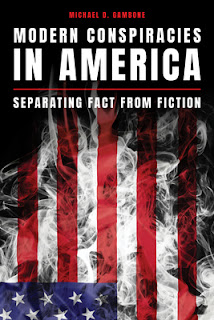 Everyone at some point has heard at least one conspiracy in their life. The author Michael Gambone shows how the world has changed over the years that has allow the modern day over the top conspiracy theories that have run rampage on the TV and internet.

What used to be tin hats, that person, Xfiles, or the uncle no one wants to talk to is now mainstream media and part of our every day.  From the most successful to the weakest of minds the authors give reader an eye-opening look at the conspiracy with the evidence and how he is able to use that information and show readers how one thought can turn into the most outrageous conspiracy to this day.

Evidence based knowledge will help reads be able to decide for themselves truth vs fiction.

Thank you to Netgalley and the publisher for the advance copy of Michael D. Gambone Modern Conspiracies in Ameria.

America is awash with alleged conspiracies. It seems like today, no one with a cell phone escapes the vortex of skepticism, cynicism, paranoia, and fear that occupy our thoughts almost constantly. Seeking out valid answers in this cacophony can be confusing and deeply frustrating. In this book, historian Michael D. Gambone provides case studies of popular conspiracy theories in America from the past 100 years, from Protocol of the Elders of Zion to #stopthesteal. He offers an approach based on basic logic and historical case studies, not designed to win arguments, but to help readers separate truth from the avalanche of nonsense descending on us every day. In each case, Gambone outlines the conspiracy claim, provides historical context for the conspiracy, presents evidence of the conspiracy claim, and analyzes the claim, context, and evidence.Modern Conspiracies in American History will appeal to a broad audience of readers interested in American history and those seeking to become better informed consumers of news in an era when social media spreads misinformation widely and quickly.

Dr. Michael D. Gambone is the author of eight books, including Long Journeys Home: American Veterans of World War II, Korea, and Vietnam (2017) and The Greatest Generation Comes Home: The Veteran in American Society (2005). He is currently a professor of history at Kutztown University of Pennsylvania and a veteran of the 82nd Airborne Division. In 2006, he deployed to Iraq as a Department of the Army contractor and served in the city of Mosul.