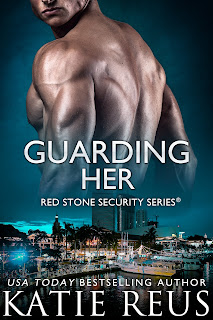 Katie Reus has the ability to write a romance that has loveable characters that will pull at readers heart strings.  The story is a stand-alone but can be read as part of the Red Stone Series.  The story takes what is going on around readers every day and uses it to tell a suspense romance that readers will be able to read at the beach at the pool or right before bed.

Katie Reus is able to quickly paint a perfect picture as well as bring readers up to speed with the past characters without slowing down the story.  This is a perfect addition to the Red Stone Security series.

Thank you to Netgalley and the publisher for advance copy of Guarding Her by Katie Reus.

After a video of her modeling her friend’s new clothing line goes viral, Gia suddenly finds herself thrust into the spotlight. She never wanted fame—she was just having fun and helping a friend. Unfortunately, now she’s got a target on her back. Someone out there will do anything to destroy her. Someone who wants her dead.As his best friend’s sister, Gia is off limits. She’s also the woman of Lawson’s dreams—and hottest fantasies. When she’s targeted by a vicious stalker, all bets are off. As a Red Stone Security expert, he’ll keep her safe at any cost. What he doesn’t know is how he’s going to keep her out of his bed, because he’s never wanted anyone as badly as he wants her. He’s all about rules—it’s why he’s such a good bodyguard—while she seems determined to test his control at every step. But if they want to survive, they’ll have to work together to stop the killer…before it’s too late.

Katie Reus is the New York Times and USA Today bestselling author of the Red Stone Security series, the Redemption Harbor series and the Deadly Ops series. She fell in love with romance at a young age thanks to books she pilfered from her mom's stash. Years later she loves reading romance almost as much as she loves writing it. However, she didn't always know she wanted to be a writer. After changing majors many times, she finally graduated with a degree in psychology. Not long after that she discovered a new love. Writing. She now spends her days writing paranormal romance and sexy romantic suspense.