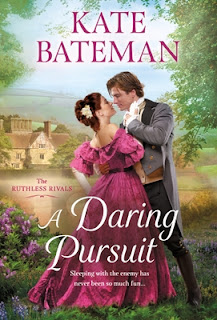 Another enticing story told by a very talented author. A fiery redheaded Davies female crosses paths with a sedate Montgomery male while trying to pay a blackmailer his demanded payment. As it turns out both have had a long held and unspoken crush for each other owing to longtime family issues. It turns into a pursuit but who is pursuing who and will the loser concede graciously?

I enjoyed this book and do recommend it if you enjoy historical romance novels. I have rated it 4 stars.
I received an ARC from Netgalley for my unbiased review.

TWO ENEMIESCarys Davies is doing everything in her power to avoid marriage. Staying single is the only way to hide the secret that could ruin her—and her family—if it was revealed. For the past two seasons she’s scandalized the ton with her outrageous outfits and brazen ways in a futile bid to deter potential suitors. Outwardly confident and carefree, inside she’s disillusioned with both men and love. There’s only one person who’s never bought her act—the only man who makes her heart race: Tristan Montgomery, one of her family’s greatest rivals.ONE SCANDALOUS BARGAINWickedly proper architect Tristan needs a respectable woman to wed, but he’s never stopped wanting bold, red-headed Carys. When she mockingly challenges him to show her what she’s missing by not getting married, Tristan shocks them both by accepting her indecent proposal: one week of clandestine meetings, after which they’ll go their separate ways. But kissing each other is almost as much fun as arguing, and their affair burns hotter than either of them expects. When they find themselves embroiled in a treasonous plot, can they trust each other with their hearts, their secrets…and their lives?