Book Review: Dead Against Her (Bree Taggert #5) By Melinda Leigh 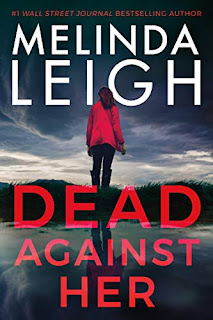 Title: Dead Against Her (Bree Taggert #5)

I wish I could repeat the same line as I have for every single one of Melinda Leigh's books.  Dead Against Her book 5 in the series starts off with what you expect. A few dead bodies. The author covers a dark side of the social media and how it can affect someone personal life. While the book teaches readers that social media can paint a fake picture to the world around you.  The story and characters within the story fall flat as the story putters its way to the end like an old car. The story falls flat for what readers usually expect from this author.  The twist and turns the author created lack any excitement and in fact are very predictable.

Thank you to Netgalley for the advance copy Dead Against Her by Melinda Leigh.

Called to an isolated farm to check on an elderly widow, Sheriff Bree Taggert finds a brutal double homicide. One of the victims is Eugene Oscar, the bitter and corrupt former deputy she recently fired.Working with criminal investigator Matt Flynn, Bree discovers that she isn’t the only one who had a troubling history with Eugene. But someone doesn’t want Bree digging up the past. She becomes the target of a stranger’s sick and devious campaign calculated to destroy her reputation, career, family, and new relationship with Matt. To make matters worse, she’s the prime suspect in Eugene’s murder.When her chief deputy goes missing while investigating the case, Bree refuses to back down. She won’t let him become the next victim. His life and her future depend on finding a killer nursing a vengeful rage.

#1 Wall Street Journal and #1 Amazon bestselling author Melinda Leigh is a fully recovered banker who learned that writing books is way more fun than analyzing financial statements. Melinda’s debut novel, SHE CAN RUN, was nominated for Best First Novel by the International Thriller Writers. Since then, she has garnered numerous writing accolades, including two RITA® Award nominations and an induction into the NJ Romance Writers Hall of Fame. Her novels have sold more than 10 million copies across the world. Melinda loves martial arts, rescue dogs, and sea turtles.