Book Review: Rules for Engaging the Earl (The Widow Rules #2) By Janna MacGregor 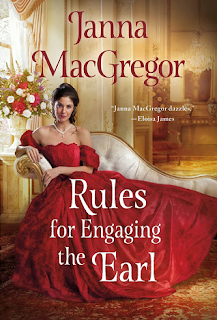 Title: Rules for Engaging the Earl (The Widow Rules #2)

This engaging tale (no pun intended) covers the story of the second, and pregnant, of three ladies who found themselves married to the same Lord after his untimely death. She asks her first love to marry her to avoid the stigma of bastard being attached to the child. They had not seen each other in ten years as he had left to join the English Army fighting on the continent. He had previously returned but with a shattered leg from two sniper rounds. Will he keep his promise of ten years prior to always be there for her? This is a story of pain and self doubt. Will she be able to overcome his reluctance to re-enter society?
I found the story line to be both enjoyable and would suggest reading both stories in this series. I have rated this book 4 stars.
I received an ARC from Netgalley for my unbiased review.
Thank you, Frank, for your review.
I have previously reviewed the first book in the series and included that review below. I hope that if you read them they will provide you the same enjoyment I had when I read them.
A Duke In Time by Janna Macgregor

Imagine, if you will, being a recent window, whose marriage was not consummated, and finding out at the reading of the will that you are one of three wife's of the deceased. This knowledge is very hard to take in as one of the other two is very much pregnant. The deceased's older brother (a recently minted Duke) wishes to wash his hands of the whole matter as he considered his younger brother to be a scoundrel and a rake. Our heroine takes in the other two wifes and tries to avoid a scandal. Gradually the Duke begins to see the proverbial light and beauty of our heroine and nature starts to take it's natural course.

An enjoyable read which I would rate 4 stars.

Constance Lysander needs a husband. Or, so society says. She’s about to give birth to her late husband’s child―a man who left her with zero money, and two other wives she didn’t know about. Thankfully, she has her Aunt by her side, and the two other wives have become close friends. But still―with a baby on the way, her shipping business to run, and an enemy skulking about, she has no time to find the perfect match.Enter Jonathan, Earl of Sykeston. Returned war hero and Constance’s childhood best friend, his reentry into society has been harsh. Maligned for an injury he received in the line of duty, Jonathan prefers to stay out of sight. It’s the only way to keep his heart from completely crumbling. But when a missive from Constance requests his presence―to their marriage ceremony―Jonathan is on board. His feelings for Constance run deep, and he’ll do anything to make her happy, though it means risking his already bruised heart.With Constance, Jonathan, and the new baby all together, it’s clear the wounds―both on the surface and in their relationship―run deep. But when the nights come, their wounds begin to heal, and both come to realize that their marriage of convenience is so much more than just a bargain.

Janna MacGregor was born and raised in the bootheel of Missouri. She credits her darling mom for introducing her to the happily-ever-after world of romance novels. Janna writes stories where compelling and powerful heroines meet and fall in love with their equally matched heroes. She is the mother of triplets and lives in Kansas City with her very own dashing rogue, and two smug, but not surprisingly, perfect pugs. She loves to hear from readers.