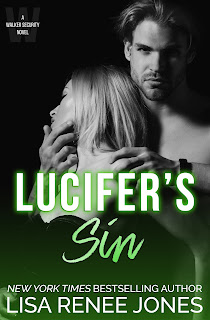 I am undecided by this book.  The story starts off with a fast start and then stops.  Another running quickly though the story and then a stop as the 2 leads focuses on what lead to the current problem.

Readers will have to suspend their belief in what would normally happen in the real work as these characters seem to define all logic when it comes to police and FBI.

The secondary characters are full and enjoyable bringing the much-needed humor in the very dark story line.

The characters are bland, typical of romantic suspense series.  I was hoping for something a little ore from Lisa Renee Jones.  This isn't the best start to a new series.

In nutshell the story falls flat and the inner monologue was just to much at times.

Thank you for the advance copy of Lucifers Sin by Lisa Renee Jones.

Tall, dark, and deadly, these men run Walker Security. Each is unique in his methods and skills, but all share key similarities. They are passionate about those they love, relentless when fighting for a cause they believe in, and all believe that no case is too hard, no danger too dark. Dedication is what they deliver, results are their reward.

Meet Lucifer, one of those men...A man with demons that run deep and dark...The only woman who can bring him to his knees...As one of the newest members of Walker Security, Lucifer lives up to his name. He’s a man with demons that run deep and dark. A man with secrets. A man betrayed by a woman, and that betrayal has shaped every part of his life moving forward.He lives on the edge with fast cars, faster women, and some might say a death wish. That is until he crossed paths with Walker Security and one of their own pulled him from the bowels of his self-created hell.But his own personal devil is about to show herself again. That woman from his past is back, and nothing is as it seems.Lucifer's Trilogy is a Tall, Dark, and Deadly and Walker Security trilogy, but all three books can be read together without reading the previous series.

New York Times and USA Today bestselling author Lisa Renee Jones is the author of the highly acclaimed INSIDE OUT series. Suzanne Todd (producer of Alice in Wonderland) on the INSIDE OUT series: Lisa has created a beautiful, complicated, and sensual world that is filled with intrigue and suspense. Sara’s character is strong, flawed, complex, and sexy - a modern girl we all can identify with.