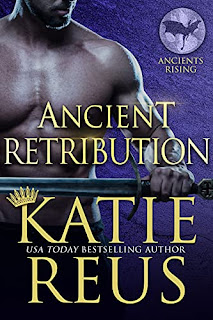 I have read many of Katie Rues Romantic Suspense series and while many are the same story just a little added difference that readers find and enjoy.  All of her stories are HEA which readers seem to enjoy.  I have read just a few of Katie Reus supernatural romantic suspense series.  While I still have a hard time imagine what the different characters and at times their appearances the author gives readers what she is famous for strong female leads and the "Alpha male" that can't live without The One!

Each story in this series brings to life the important of family no matter happens in the past and future.

The story moves quickly, and this story is a stand-alone but I would recommended readers reading at least 1-4 in the series to get a better understand of the world the author has created. Yes lot and lots of steamy sexy time.

Thank you to Netgalley for a copy of Ancient Retribution By Katie Reus.

Juniper hunts down the most dangerous criminals on her black ops missions—and she’s good at it. A dragon shifter who was raised by wolves, she doesn’t know her birth clan and gave up trying to find them a hundred years ago. Since The Fall, when rogue dragons razed half the planet, she’s spent her days hunting down supernaturals who think they can escape justice, delivering her own. During a dangerous mission, she falls into the claws of a sexy warrior dragon adjusting to the modern world—and from the start she knows she’s in trouble.Dragon shifter warrior Zephyr doesn’t fit into this new world. He doesn’t feel like he fits in anywhere—until he meets Juniper and her crew. He knows from the moment he sees the sexy and brave female dragon that they’re destined to be together. Unfortunately, life just got a whole lot more complicated. Not only are they in the fight of their lives against an overwhelming enemy force, but she’s royalty and her long-lost clan has come to bring her home. Even as they fight side by side to save hundreds of humans, he knows that winning her heart will be the hardest and most pivotal battle he’s ever waged. Juniper doesn’t want to get mated, doesn’t trust anyone with her heart—but this is one battle Zephyr will never stop fighting.

Katie Reus is the New York Times and USA Today bestselling author of the Red Stone Security series, the Redemption Harbor series and the Deadly Ops series. She fell in love with romance at a young age thanks to books she pilfered from her mom's stash. Years later she loves reading romance almost as much as she loves writing it. However, she didn't always know she wanted to be a writer. After changing majors many times, she finally graduated with a degree in psychology. Not long after that she discovered a new love. Writing. She now spends her days writing paranormal romance and sexy romantic suspense.