Book Review: The Bitter Fruit Beneath by Julie Evans 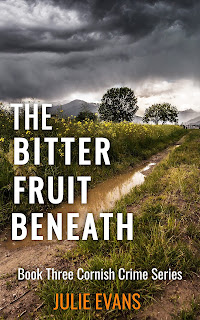 Title:  The Bitter Fruit Beneath

A British crime novel but told from the viewpoint of the duly engaged solicitor for the accused. A newborn baby is found dead and the cause of death is found to be smothered owing to having been buried while still alive. The accused mother disavows all knowledge of the deed and birth. Numerous red herrings are found before the truth comes forth. A truly delightful read for the amateur, or in my case not so amateur, detective.

I have rated this book 4 stars and recommend it to all armchair amateur detectives.

I obtained this book in Kindle ebook format from Amazon. This is my unbiased review. I have not and will not receive any form of payment for same.

Thank you, Frank, for your reviews

Burnt out and disillusioned following a messy divorce and a career defending the very worst type of criminal, Eden Gray escapes the city and moves back home to her beloved Cornwall to start her own law firm. Though money is tight, she begins to think life is sorted until she is railroaded into defending teenage surrogate, Rowan Lutey, charged with the manslaughter of a baby found buried in a ‘witch pit’; one of a number of ancient pits filled with fertility offerings discovered by archaeologists at a site close to the Lutey farm.With the discovery of the baby, the family is plunged into a shadowy past full of secrets and face personal attacks fueled by fear and superstition as the baby's discovery sparks a media frenzy.Abandoned as an infant, Eden’s feelings about her birth mother are unleashed as the site’s shadowy history is revealed.As she risks her life to unravel the mystery and protect others from a manipulative and deranged killer, she discovers the truth about her client, her own abandonment and an inner strength she never imagined she possessed.

After training as a lawyer, Julie returned to her native Cornwall to establish her own law firm and to raise her three children. After years building a successful legal practice it was time for a new adventure and she decided to write the stories she had formulated in her head over the years about her community and the lives of those who find themselves on the wrong side of the law.

‘I have always been fascinated by the schizophrenic character of the windswept Cornish peninsula my family has been lucky enough to call home for generations. Occupied by a cast of reluctant bedfellows, city-slick escapees and us locals who carry the remnants of our myth-ridden history etched on our backs like tattoos, it teeters between the bucket and spade domesticity of modern-day tourism and a superstitious past, riddled with Pagan traditions.

The resultant clash of cultures and sensibilities causes friction, resentment and drama. My aim, through my writing, is to explore what happens when these divergent worlds collide to expose a darker reality at odds with the picture-perfect landscape. Whilst I was lucky to enjoy a fantastically satisfying career as a lawyer I cannot now imagine anything more joyous than being able to sit at my desk and write knowing others might read and connect with my words. Cornwall has captured the hearts and imaginations of countless wonderful writers through the decades; their vivid images now woven into its rich tapestry. If I can add one colourful stitch I will be happy.’