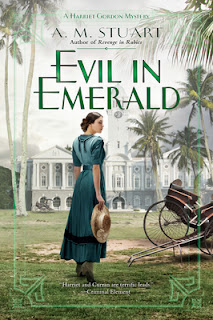 A period piece that will take the reader back to the early twentieth century and into exotic Singapore. This is a time when the fabled  British Empire was alive and thriving. There were the British, other wester people, and natives. So for the reader to fully understand they must be of that mindset and not judge actions by current social standards. A murder has been committed in the British social set and so an investigation begins. This will be followed by two other murders, insurance fraud, a vicious assault and information about the kidnapping of a previously unknown sister of the investigating Police Inspector. While the murders and insurance fraud are solved the kidnapping is not but the framework, and characters are excellently built for a follow up novel.

If you are a fan of period mysteries, which appear to accurately portray existing social conditions, you will enjoy this book. I have rated it 4 stars.
I received an ARC from Netgalley for my unbiased review.
Thank you Frank for your review!

Between working at her brother’s school and typing up Inspector Robert Curran’s police reports, Harriet Gordon has little time for personal pursuits and she has been enjoying the rehearsals for her role in the Singapore Amateur Dramatic and Musical Society’s latest production – Pirates of Penzance. But Harriet quickly discovers tensions run deep within the theatre company and when the leading man is found murdered, suspicions abound, exposing scandalous behavior as well as some insidious crimes.

Inspector Curran once again turns to Harriet for help with this difficult case, but his own life begins to unravel as a mysterious man turns up on his doorstep claiming to know more about Curran’s painful past than he himself does. And after the one person he has always counted on delivers him some devastating news, the line between his personal and professional life begins to blur. Now, more than ever, Curran needs Harriet’s steadfast assistance, and when another cast member meets a violent end, Curran and Harriet will have to close in on a killer determined to make this case their final curtain call.

Australian author, A.M. Stuart, began her writing career half way up a tree in the school playground where she wrote her first (unpublished) historical romance. She now writes historical romance as Alison Stuart (a Goodreads author).Born in Kenya, her family came to Australia when she was ten years old. She has also lived in Singapore.In her life outside writing, she enjoyed a varied career as a lawyer in a wide number of fields including the military and as a senior executive in the fire services.