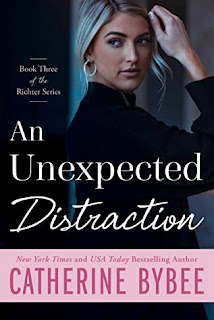 An Unexpected Distraction starts off fast and than slows down as characters are introduced and Jax deals with her unfeeling family. Catherine Bybee writes from different points of view giving the readers the main characters reactions and thoughts though the entire book.  While readers can jump into book three of the series I would recommend readers start with book one just to have a better idea of what Richter did.

The story  is like so many other Catherine Bybee writes the romance at times takes over the story but when the action starts reader will never get enough of her strong women.

Personal not this wasn't my favorite in the series it was a little slower than expected.

Jacqueline “Jax” Simon knows how to expose secrets: she’s a skilled operative with MacBain Security and Solutions. When Jax hears her parents are divorcing, she races to London to find out why. She’s determined to learn the truth, especially when her investigation uncovers why her parents sent her to Richter, the German military school that made her a fighter.

Andrew Craig collects Jax at Heathrow Airport as a favor. He’s heard she’s a handful, but he didn’t know she’s dangerously gorgeous too. His instant attraction could change his life…or end it.

Jax doesn’t want to fall for Andrew, but soon he’s worming his way into her life. Together, they infiltrate Richter to discover if it has returned to its covert purpose: training children to be spies and assassins and blackmailing parents to look the other way. As the attraction between the two intensifies, so do the secrets exploding all around them. How deadly are those secrets—and who will survive?

atherine Bybee was raised in Washington State, but after graduating from high school, she moved to Southern California with hopes of becoming a movie star. After growing bored with waiting tables, she returned to school and became a registered nurse, spending most of her career in urban emergency rooms. She now writes full-time and has penned the International Bestselling