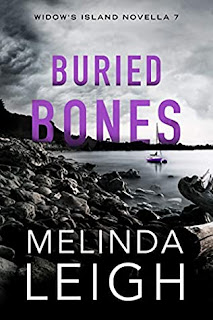 Melinda Leigh and Kendra Elliot are writing a series of novella called Widows Island .  Melinda Leigh characters are Tessa Black deputy of Widow island.  The characters comes to life in each story of murder and mystery.

The author is able to pack a punch in so few pages.  Each story builds on each other the characters grow and the community the author's create become real and walk right off the pages.

Thank you to Netgalley and the publisher for a copy of Buried Bones.

All communities have their secrets…but on Widow’s Island, there’s a skeleton in every closet, as Deputy Tessa Black knows all too well. When Tessa stumbles upon a half-buried body in the woods, a peaceful morning hike suddenly turns into a race to catch a killer.

Tessa identifies the skeletal corpse as Aurora Franklin, a young college student and aspiring actor. She’d come to Widow’s Island for a summer job, only to be strangled and discarded. Aurora has been dead for over a month—and not a single islander has reported her missing.

The investigation reveals a dangerous predator hiding in the Widow’s Island community. With her fiancé, park ranger Logan Wilde, by her side, Tessa must find Aurora’s murderer before they strike again.

Melinda’s debut novel, SHE CAN RUN, was nominated for Best First Novel by the International Thriller Writers. Since then, she has garnered numerous writing accolades, including two RITA® Award nominations and an induction into the NJ Romance Writers Hall of Fame. Her novels have sold more than 10 million copies across the world. Melinda loves martial arts, rescue dogs, and sea turtles.