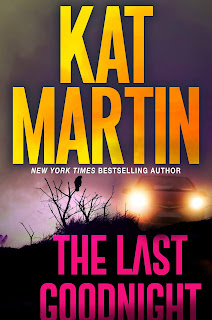 Kat Martin usually is able to pull off a balance of romance, action and story building without one story line taking over the other,

The last goodnight realized heavy in the hot and spicy moments and less on the story that readers are trying to understand. This is book 1 in a new book series by Kat Martin so there is a lot of introductions to different characters readers will get to know as the series moves forward. The characters are likeable and with the intraromance readers who need that will enjoy this book.

Thank you to Netgalley for a copy of The Last Goodnight.

When Kade Logan said goodbye to his estranged wife eight years ago, he never thought it would be the last time he saw her alive. Now her car has been hauled out of a nearby lake and Kade is determined to track down the man who murdered her. Enter Eleanor Bowman, a talented private investigator who’s about to stir up a hornet’s nest on his Colorado ranch.With old scandals still buzzing about his late wife’s many affairs and new violence erupting, Kade is faced with the discovery of another beautiful woman’s body. Are the two killings linked? Who is the man who seduced, then murdered both victims? Ellie believes they are dangerously close to the truth.From corporate Denver high-rises to posh Vail mansions, Kade and Ellie sense the killer is closing in again, and this time Ellie is the target. Kade must risk everything to save the woman he’s coming to love—before she becomes the next one to die . . .

Kathleen Kelly was born on 14 July 1947 in the Central Valley of California, USA. She obtained a degree in Anthropology and also studied History at the University of California in Santa Barbara. She was a real estate broker, when she met her future husband, Larry Jay Martin. A short time after the two became acquainted, Larry asked her to read an unpublished manuscript of an historical western he'd written. Kat fell in love with both the book and the author! Then, after doing some editing for him, she thought she'd try her own hand at writing. She moved on to become a full time writer.