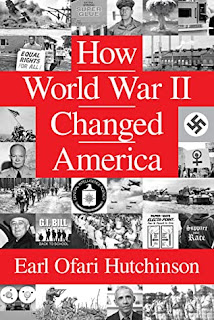 A thought provoking work that left me wondering if the original intent was, to gather new followers, or convince current followers of the author that he is correct. While I enjoyed his perspective of events I was not converted to his very apparent viewpoint. I feel that an individual gets out of life what he is willing to work for and achieve on his own merits. There is no free lunch without strings attached and if it sounds to good to be true it probably is not true.

I have rated this book 3 stars. I recommend it be read only to be informed of current thinking.
I received an ARC from Netgalley for my unbiased review.
Thank you Frank for your Review.

My father. Earl Hutchinson Sr. and my uncle, James Hutchinson, were World War II veterans,” says political and World War II History analyst Earl Ofari Hutchinson. I grew up hearing the stories about my father’s wartime experiences and how those experiences changed and shaped his life. The war has always had special meaning for me.”

Earl Ofari Hutchinson's new book, How World War II Changed America, is scheduled for release on August 6, designated Hiroshima Day globally and months before commemoration of the 80th anniversary of the December 7. Japanese attack on Pearl Harbor. The attack propelled the U.S. into the war. The events continue to spark discussion, debate, and reflection on the lessons still to be learned from World War II.

How World War II Changed America pays tribute to the enduring changes the war brought to America and the men and women who made those changes. Says Hutchinson. “My father’s story and the story of others affected by the war I tell.” He further notes, “The one certainty about any new look at World War II is that if the U.S. had not entered the global fight, it would be a much different America today. And so would their story.”

Hutchinson presents a riveting look at the monumental changes that World War II produced in the U.S. How those changes transformed America. And how those changes shape the lives of Americans today and will continue through the 21st Century. The changes touch every aspect of American’s lives in technology, industry, politics, race, gender, the social movements for change, nuclear armaments, national security, and international relations.