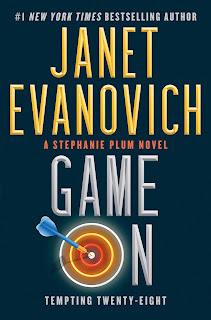 I think it might be time Janet Evanovich puts away Stephanie Plum series.  The story falls flat using the same old story lines with the same romance and a story that doesn't bring anything new into the series.

Reader will be excited to find Diesel in the story but it isn't until half way though the book.  Once he arrives Diesel isn't the one readers have come to know and love.

Game On isn't a new story it is the only stories thrown together making a half attempt to keep the Stephanie Plum series moving to the next book.

Thank you to Netgalley for a copy of Game on Tempting Twenty Eight.

When Stephanie Plum is woken up in the middle of the night by the sound of footsteps in her apartment, she wishes she didn’t keep her gun in the cookie jar in her kitchen. And when she finds out the intruder is fellow apprehension agent Diesel, six feet of hard muscle and bad attitude who she hasn’t seen in more than two years, she still thinks the gun might come in handy.Turns out Diesel and Stephanie are on the trail of the same fugitive: Oswald Wednesday, an international computer hacker as brilliant as he is ruthless. Stephanie may not be the most technologically savvy sleuth, but she more than makes up for that with her dogged determination, her understanding of human nature, and her willingness to do just about anything to bring a fugitive to justice. Unsure if Diesel is her partner or her competition in this case, she’ll need to watch her back every step of the way as she sets the stage to draw Wednesday out from behind his computer and into the real world.

Janet Evanovich is the #1 New York Times bestselling author of the Stephanie Plum series, the Lizzy and Diesel series, twelve romance novels, the Alexandra Barnaby novels and Trouble Maker graphic novel, and How I Write: Secrets of a Bestselling Author, as well as the Fox and O'Hare series with co-author Lee Goldberg