Book Review: Right Behind Her (Bree Taggert #4) by Melinda Leigh 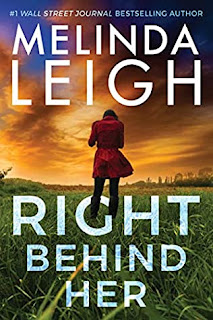 Title: Right Behind Her (Bree Taggert #4)

Book 4 in the Bree Taggert series is a painful revisit to Bree.  The story pushes readers into finding the heart and soul of a dark story.  Bree faces more heart along with painful memories that will keep readers hooked and ready for book in this can't miss series.

Melinda Leigh is able to bring to life the characters that live in her head.  The characters become part of a family that readers didn't know they wanted but can't live without knowing what will happen next.

Melinda Leigh is able to wrap romance, suspense, family, life and death into a perfect series that readers will never get enough of.

Thank you to publisher for the advance copy of Right Behind Her!

Twenty-seven years ago, Sheriff Bree Taggert’s father killed her mother, then himself. Now Bree and her younger brother, Adam, find human bones on the grounds of their abandoned family farm. The remains are those of a man and a woman, both murdered in the same horrible way.

When the investigation determines the murders occurred thirty years ago, Bree’s dead father becomes a suspect, forcing Bree to revisit the brutal night she’s spent most of her life trying to forget. The only other suspect is an unlikely squatter on the Taggert farm who claims to know secrets about Bree’s past. When he mysteriously disappears and Bree’s niece is kidnapped, the cold case heats up.

Bree has stoked the rage of a murderer who’ll do anything to keep his identity—and motives—a secret. To protect everyone she loves, Bree must confront a killer.

Melinda Leigh is a fully recovered banker who learned that writing books is way more fun than analyzing financial statements. Melinda’s debut novel, SHE CAN RUN, was nominated for Best First Novel by the International Thriller Writers. Since then, she has garnered numerous writing accolades, including two RITA® Award nominations and an induction into the NJ Romance Writers Hall of Fame. Her novels have sold more than 10 million copies across the world. Melinda loves martial arts, rescue dogs, and sea turtles