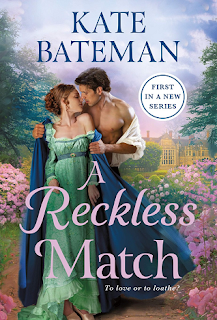 An engaging historical romance story set in 1815 on the border between England and Wales. Two families, who have had a dispute spanning generations, have the opportunity to lay it to rest. Can a mutual attraction between two of the involved parties be the solution that has eluded them for years? It is a delightful chase with a mutually satisfying outcome.

I enjoyed the story and have rated it 3.5 stars. It reminded me of the Hatfield and McCoy feud, without the violence, that took place in the vicinity of where I was raised as a youngster.
I received an ARC from Netgalley for my unbiased review.

Maddie Montgomery's family is in debt, and her hope rests on the rival Davies clan missing their yearly “pledge of goodwill,” ceding the land that separates their estates. With Maddie's teenage nemesis, Gryffud “Gryff” Davies, Earl of Powys, away, hope is in reach.But then, Gryff shows up and is stunned that the tomboy he once teased is now a woman. When Gryff and Maddie discover contraband on their land, they realize it can benefit both families. But they've also uncovered a dangerous plot, and they need to work together to get out alive. Soon, their hatred for each other starts to feel more like attraction.Kate Bateman brings crackling banter, steamy romance, and a dash of adventure into the first book in the Ruthless Rivals series.