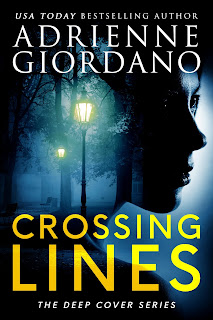 Adrienne Giordano is a wonderful author who is able to pull readers in from the first sentence to the last page. The dialogue between characters is fast pace and will keep readers needing more between Shane and Liz.  The story moves quickly that will make it impossible to put down the book as readers wonder what the characters are getting into as the book is closed.

Readers will be kept on the edge of their seats as they finish Crossing Lines.

Thank you to Netgalley and the publisher for a copy of Crossing Lines.

While protecting a dangerously attractive ex-agent, a former CIA operative must decide which asset is more important to him: his identity or his heart.She's running out of friends—and out of time.CIA operative Elizabeth Aiken is on her own. After a rescue operation in Venezuela goes south and her cover is blown, Elizabeth barely escapes the country with her life. Set adrift by the agency and with a price on her head, she seeks out the only person who can help her disappear.Viper.Unfortunately, the devastatingly attractive former operative wants nothing to do with her or the cartel-backed Venezuelan president who wants her dead. Worse still, if Elizabeth's not careful, she'll end up losing her heart instead of watching her back...and there's no room for mistakes with assassins hot on her trail.Helping her could destroy everything he's worked for.Former Marine-turned-CIA operative.Current bar owner.All-around badass.Shane "Viper" Quinn has spent years constructing the perfect cover, and he's not about to sacrifice it for a woman he barely knows. Even if she is strong and beautiful and makes him long for sultry nights that could destroy his carefully crafted life.Still, Shane is forced to fight his growing attraction to the fearsome ex-agent while keeping her in one piece. Elizabeth's enemies are now his enemies—and they aren't going to stop until everyone who stands against them is eliminated. Will having the deadly Viper by her side be enough to save her?

Adrienne Giordano is a USA Today bestselling author of over thirty romantic suspense and mystery novels. She is a Jersey girl at heart, but now lives in the Midwest with her ultimate supporter of a husband, sports-obsessed son and Elliot, a snuggle-happy rescue. Having grown up near the ocean, Adrienne enjoys paddleboarding, a nice float in a kayak and lounging on the beach with a good book.