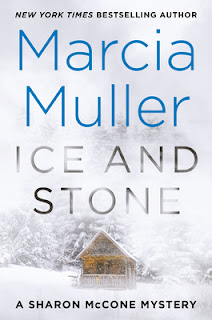 Marcia Muller has written 34 book in the Sharon McCone series. I have only read maybe one other but Ice and Stone has be wanting to fix that.  The story is pure mystery that shows what it is like for people in the outside of the Native American government and American government try to solve a murder together.

The story moves quickly keeping readers guessing who and what will happen next.  The author pulls readers into her world showing another side to a world most never know about.

Thank you to Netgalley for a review of Ice and Stone.

When the bodies of two Indigenous women are found in the wilderness of northern California, it is only the latest horrific development in a string of similar crimes in the area. Despite all evidence to the contrary, officials rule the deaths isolated incidents, which soon join the ranks of countless other unsolved cases quickly dismissed by law enforcement. In a town where too many injustices are tolerated or brushed under the rug, only a few people remain who refuse to let a killer walk free. But Private Investigator Sharon McCone is one of those few. She is hired by an organization called Crimes against Indigenous Sisters to go undercover in Meruk County—a community rife with secrets, lies, and corruption—to expose the truth. In an isolated cabin in the freezing, treacherous woods, McCone must work quickly to unravel a mystery that is rooted in profound evil—before she becomes the killer’s next target.

A native of the Detroit area, Marcia Muller grew up in a house full of books and self-published three copies of her first novel at age twelve, a tale about her dog complete with primitive illustrations. The "reviews" were generally positive.