Book Review: From Britain With Love: Hilarious Comedy Adventures by Robert A. Webster 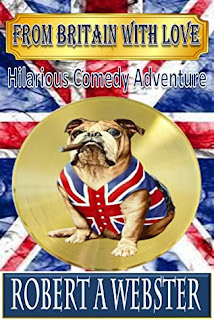 An engaging tale of a group of old men residing in a residential care home. They are all musicians and start to perform together and have a surprise success. The humor is British and must be understood to appreciate it fully. They retreat to parts of Asia and sample the seamier side of life while escaping from the publicity which will reveal their true identities and age.

I have rated this book 4 stars and consider it to be a good example of British humor at its best.
I received an ARC from Netgalley for my unbiased review.

Thank you Frank for your review.

Proof that getting old doesn't mean you can't have fun. It just means you know how to get away with it!Fossdyke Retirement Home has seen its fair share of quirky characters, but it’s never seen the likes of these four geriatric rockers!To outsiders, they are sweet, funny, if not a tad bit ornery. To those in the know, they are meddlesome, rebellious, and in way over their heads. When chaos erupts, they’re not far behind.What begin as ordinary days, where others their age would spend their time chatting up a friend or family member, these four spend their days and nights making music, performing for their legion of fans, globetrotting to exciting destinations, and of course, getting mixed up in perilous situations. Between outrunning the press and persistent record companies, coming face-to-face with ISIS rebels, and the occasional death or two, it’s all they can do to keep their wits about them and escape injury.Follow the madcap adventures of Britain’s most irreverently lovable elderly rockers as they trip, stumble, and fall into one situation after another and have a few laughs along the way in From Britain with Love, a hilarious action-packed series!

Robert A. Webster is a multi-genre author based in Sihanoukville, Cambodia. Originally from Cleethorpes, UK, he embodies both hearty wit and adventurous vigor, making his prose insanely memorable and incessantly enjoyable. His unique brand of snarky humour and imaginative storytelling breathe vivid life into his work, which combines comical British characters with exotic Southeast Asian settings. The result is "brilliant" and "unpredictable," as Dinorah Blackman of Readers' Favorite says.His first novel Siam Storm received rave reviews in the expat community in southeast Asia. Its sequels, Chalice and Bimat, were similarly acclaimed. Protector, the fourth book of the Siam Storm series, continues the journey of the lovable scallywags who have a penchant for mischief. The books document high-octane escapades and colourful, fantastical narratives that don't stop.