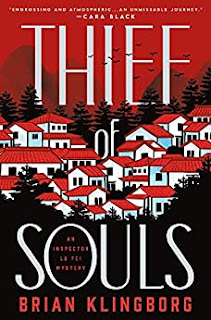 The author manages to transport the reader to another country, that most of us are unfamiliar with, and make us feel comfortable. There we are able to follow Inspector Fei

through a difficult murder investigation from beginning to end. The investigation is fraught with both local and national politics, personal bias, and fear of law enforcement agencies. Inspector Fei skillfully navigates this morass and, through diligent police work, successfully resolves the murder in spite of these problems. Additionally, two others connected, but unsolved, in a nearby metropolitan area are solved. The story progresses in a realistic and logical manner.

I have rated this book 4.5 stars. If you enjoy a good murder mystery you will not want to miss this one.

Thank you Frank your review.  I received an ARC from Netgalley for my unbiased review.

Lu Fei is a graduate of China’s top police college but he’s been assigned to a sleepy backwater town in northern China, where almost nothing happens and the theft of a few chickens represents a major crime wave. That is until a young woman is found dead, her organs removed, and joss paper stuffed in her mouth. The CID in Beijing—headed by a rising political star—is on the case but in an increasingly authoritarian China, prosperity and political stability are far more important than solving the murder of an insignificant village girl. As such, the CID head is interested in pinning the crime on the first available suspect rather than wading into uncomfortable truths, leaving Lu Fei on his own.

As Lu digs deeper into the gruesome murder, he finds himself facing old enemies and creating new ones in the form of local Communist Party bosses and corrupt business interests. Despite these rising obstacles, Lu remains determined to find the real killer, especially after he links the murder to other unsolved homicides. But the closer he gets to the heart of the mystery, the more he puts himself and his loved ones in danger.

Brian Klingborg is a graduate of Harvard's Regional Studies East Asia program, and spent many years living and working in Asia and Europe. In addition to his first novel, Kill Devil Falls, published in 2017, he's written widely on Chinese martial arts.His second novel, Thief of Souls, will be published by Minotaur Books (St. Martin's Press) in March 2021.He currently lives in New York City.