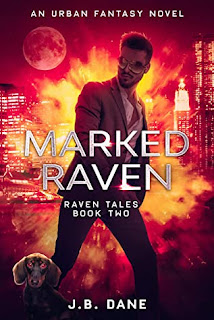 I am not sure where to start.  Readers will need to start with the first book in the series to understand the characters.  J.B Dane tries hard to fill in the last book quickly as possible at the beginning of the story. Yet it falls apart in confusion.  Soon the story picks up in the most unique urban fantasy I have read.

The author created a story that will have readers wondering if the author forget to add the kitchen sink to the crazy cast of characters.  The author ability to write will timed humor , perfect pace to the action of the story as well as moment that will have you scratching your head wondering what will happen next.

Thank you to Netgalley for the a copy of J.B. Dane Marked Raven

Valentine’s Day could be the most dangerous time of the year if an angry Cupid is the hit man hunting you down.Bram Farrell, paranormal PI, has been yanked from the pages of the novel. His author and creator brought him into real-world Detroit to do a job for her, but the job went south, and the real-world Detroit is as loaded with monsters and magical beings as the pages of her books were. And they are all out to get Bram and exact some otherworldly revenge on him.Most guys wouldn’t mind that it’s raining females, some expected, some surprises, one he could do without. And then there is his new secretary, Naomi, who he’s falling in love with. Keeping her alive—and himself—is going to be tricky.Outrunning an alchemist, a vampire, and a witch is going to take more than cutting wit.Luckily, this paranormal Sam Spade has some resources besides his dry sense of humor. His dachshund Hellhound is with him and his magic is coming back. Which should be helpful considering someone has put a hit out on him.There’s a lot on Bram’s plate this February. The question is, will he live through it this time?Entertaining, funny and suspenseful, Marked Raven is the perfect place to pick up the Raven Tales urban fantasy series

J.B. Dane loves writing snarky sleuth heroes. Her regular "crew" includes Bram Farrell (The Raven), Nick Claus, Rip Patterson, and a lot of dragons.She came to fantasy mystery late, running up a tally of over 30 romance titles as Beth Henderson. Oddly enough, she began reading urban fantasy as a "palate cleanser", thinking she'd never write in the genre. Her muse thought differently and introduced her to a guy she'd first thought up in the late 1980s before she was published. Bram Farrell was still sitting patiently in the waiting room for his turn to become a hero in what would also turn out to be Dane's first series. She's very glad the outdated magazines didn't chase him away