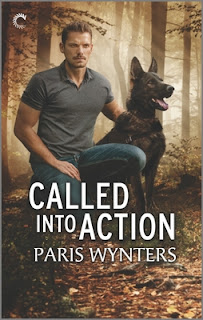 This is a slow burn romance and most of what is described in the synopsis doesn't really happen until late into the book.

The story is written well enough just like the romance it is a slow story but when the action happens it is quickly and wish the author had a better balance between the fast action pace and the slow more getting to know you stage in the story telling.

All in all the romance isn't steamy but just the right amount of romance to leave readers satisficed.

Penelope Ramos has dreamed of being a K-9 search-and-rescue handler since she was a little girl. Armed with a quick mind and her German shepherd, Havoc, she rides into Maple Falls, Vermont, determined to get her certification. She isn’t expecting the gruff, unreadable park ranger assigned to evaluate her skills.Park ranger Jay Gosling is a pro. It’s clear to him that neither Penelope nor her unpredictable canine has what it takes…although his boss feels otherwise. Whatever. Jay will never have to work with them and he has half a mind to escort them both right out of town. But when a young boy goes missing, he doesn’t have that luxury.Working side by side tests their tentative peace, but Jay and Penelope are together on one thing: they’ll both do whatever it takes to find the missing child—before it’s too late.

Paris Wynters is an adult romance author repped by Tricia Skinner at Fuse Literary. She lives on Long Island (in New York) with her family, which include a son who plays travel hockey and two psychotic working dogs. Paris is a graduate of Loyola University Chicago.Paris and her son are nationally certified Search and Rescue personnel (she is a canine handler). She is a huge supporter of the military/veteran community. When not writing, Paris enjoys playing XBOX (she is a huge HALO fanatic), watching hockey (Go Oilers), and trying new things like flying planes and taking trapeze classes.