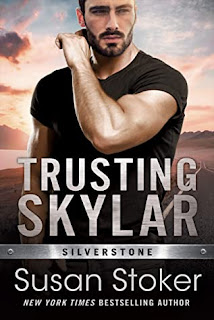 Susan Stoker has been using the same predictable story line for the last several series.  As a reader and reviewer I like to see if the author changes up their style of writing.  Susan Stoker uses the same story lines just change them enough to sound like a new story or series.

Her stories are unbelievable and over the top at the best.  This new series isn't anything new and it neither add to her current book list.  The story is all introduction to the new characters, their past and what the future will be focused on.

The story works for those who are fans of this authors writing style.

Thank you to Netgalley and the publisher for a copy of Susan Stoker Trusting Skyler.

Former military operative Carson “Bull” Rhodes hasn’t dated seriously since he and his teammates left the army. Since then he’s opened Silverstone Towing—which is a front for his other job: hired killer. When kindergarten teacher Skylar Reid calls for help while stranded on the side of the interstate, the attraction is instant. The problem is Bull’s career has jaded him. Skylar’s innocent, and he wants to keep her that way.Cautious by nature, Skylar never expected to fall in love with her tow truck driver. Even so, once Bull reveals what he really does for a living, she’s not sure she can handle it. When Skylar faces threats that have nothing to do with Bull’s job but are just as deadly, the stakes are higher than ever.With the help of the Silverstone team, Bull will use everything he’s learned over the years to bring the woman he loves home—because the alternative is unthinkable.

Susan Stoker has a heart as big as the state of Tennessee where she lives, but this all American girl has also spent the last fourteen years living in Missouri, California, Colorado, Indiana, and Tennessee. She's married to a retired Army man who now gets to follow her around the country.