Book Review: The Princess and the Rogue (Bow Street Bachelors #3) by Kate Bateman 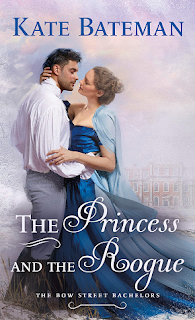 Title: he Princess and the Rogue (Bow Street Bachelors #3)

A regency tale of treachery, deception, murder and lust which bring a runaway Russian Princess and an English Earl together in a very unusual first meeting. He is unaware of her elevated status, and thinks she is just a beautiful light skirt, as he first meets her in a bordello. His interest is aroused and his passion is left unsatisfied after she turns down his very high priced overture. He later learns she is his Aunt's companion and her purported status. Although he is still unsure of her status he takes her under his protection and enlists her help in identifying a Russian traitor. Their passions become even more enflamed during this time period and both have to make a decision on the correct and appropriate course of action to take

I have rated this book 4 stars and recommend it to all readers who enjoy a Regency romance romp.
I received an ARC from Netgalley for my unbiased review. The above remarks are my thoughts and not influenced by the author of publisher.

Bow Street agent Sebastien Wolff, Earl of Mowbray, doesn't believe in love―until a passionate kiss with a beautiful stranger in a brothel forces him to reconsider. When the mysterious woman is linked to an intrigue involving a missing Russian princess, however, Seb realizes her air of innocence was too good to be true.

Princess Anastasia Denisova has been hiding in London as plain 'Anna Brown'. With a dangerous traitor hot on her trail, her best option is to accept Wolff's offer of protection―and accommodation―at his gambling hell. But living in such close quarters, and aiding Wolff in his Bow Street cases, fans the flames of their mutual attraction. If Anya's true identity is revealed, does their romance stand a chance? Could a princess ever marry a rogue?

Kate Bateman (also writing as K. C. Bateman) wrote her first historical romance in response to a $1 bet with her husband who rashly claimed she'd 'never finish the thing.' She gleefully proved him wrong. Her Regency and Renaissance-era romances all feature her trademark feisty, intelligent heroines, wickedly inappropriate banter, and heroes you want to both strangle and kiss.When not traveling to exotic locations 'for research,' Kate leads a double life as a fine art appraiser and on-screen antiques expert for several TV shows in the UK, each of which has up to 2.5 million viewers. She splits her time between Illinois and her native England and writes despite three inexhaustible children and a number-loving husband who still owes her that dollar.Kate loves to hear from readers. Contact her on Twitter @katebateman, Facebook, or via her website at www.kcbateman.com