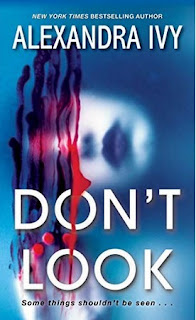 I will start off I really like Alexandra Ivy romantic suspense stories. This story will not disappoint even though at times readers will want to strangle certain characters that is what creates a good story telling.

The story is fast moving and readers will have to keep up with who is whom and who is dying and what is the connections.

This is book one of a new series with lots of questions and a few moments of come on really! Don't look is a great start to a new series.  There are a lot of characters readers are introduced which I am sure will have bigger parts in the stories to comes.

IF YOU'RE ON HIS LISTA woman's naked body is discovered, cold and pale as the surrounding snow--except for the crimson scarf around her neck. The weeks that follow bring more victims and evidence of a terrifying pattern. The killer has a list. And every woman on it will get what she deserves . . .YOU'RE AS GOODDr. Lynne Gale followed in her father's footsteps to become a vet in Pike, Wisconsin. For years, she's had little contact with Kir Jansen, son of the town's late sheriff. Suddenly he's back, insisting that Lynne's in danger. She can't believe anyone would target her, but someone is hunting the women of Pike, savoring every last moment.AS DEADKir hoped that his father's frantic calls about a serial killer were just an old man's delusions. But the body count doesn't lie. In this quiet town, a monster stalks and kills. And soon, Lynne's will be the last name on his list .