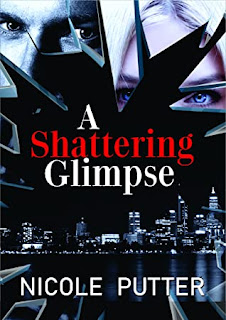 This is the first book in the a series by a new author Nicole Putter.  It takes courage to write and publish books and sometimes those stories comes to life and other times they do not quite make it.  This book is one of those stories.  The story has an interesting premise of a girl who sees the future that can change the future depending on how she reacts to the information.  Claire has a dream she can not ignore and a person she needs to warn even though she has never met that person.

The story is very slow moving even when Claire finally meets the man in her dreams who can't decided if she is crazy.  While Claire comes off as a young girl naïve who fell in love with a FBI agent from her dreams. When in fact she should be more level headed young adult who is trying to prevent the end of the world.

A Shattering Glimpse fails to delivery what readers are giving in the synopsis of the story. The story lacks excitement, characters who connect and realism needed to have a convincing story.

The dreams: For years, Claire Baxter has been haunted by ceaseless dreams of an FBI Agent.The dilemma: She has no idea who he is or if he even exists.The death: Right before she’s set to graduate from college, a dream reveals him dying in a brutal explosion.One touch and not-so-normal Portland girl, Claire Baxter, can get a glimpse of your nearby future. She considers nothing about her clairvoyance a gift, it’s a curse, to say the least. Her parents raised her with the rule that she is to keep the secret at all cost, leaving little room for relationships of any kind. As if the burden isn’t enough, FBI agent Byron Black becomes the phantom of a series of sinister dreams.The night before her final college exam, she has another dream, except in this one, he dies in a nuclear explosion. Does he exist? Will she find him? If so, can she save the countless lives affected by a blast that can crush steel like it’s a piece of paper, or… is this something her lost, psychic mind conjured up?

Welcome to Nicole Putter Books where fellow writers and readers become friends. I’m Nicole Putter, a novelist, proud wife, and mom of a seven-year-old and a Jack Russel named Striker. I started out writing stories on free websites (they were terrible), but I soon found my passion and focused more on a writing career. It took me several years and four creative writing and journalism courses (completed with honors) to become the writer I am today.