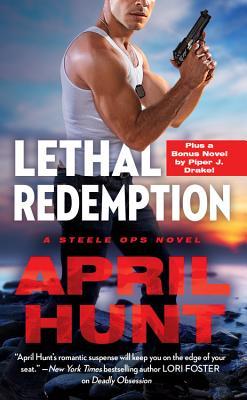 Review:
The story pick up where Steele ops book one leaves off.  This isn't really a stand alone novel. The characters and story flow better starting with the first book due to many different characters.
Grace and Cade work will together and their romance makes since as well a their concern for each other.  The story is interesting with the cult, mother wanting more out of life.  Parts of the story felt as if they were written with a different story in mind and tossed in without the right balance to make the story flow evenly.

Thank you to Netgalley and the publisher for the advance copy of April Hunt by Lethal Redemption.

Synopsis:
Top FBI profiler Grace Steele was just a girl when she escaped the Order of the New Dawn, and she’s spent the last seventeen years trying to forget her time there. But when private security firm Steele Ops needs her help extracting a young woman from the secretive cult’s clutches, she’s all in. Even though the mission requires posing as the fiancée of the only man who’s ever broken her heart.It’s been nine years since Cade Wright turned his back on his childhood sweetheart, and he’s never stopped regretting it. Now that they’re forced to work together, he knows this is his opportunity to show Grace how much he’s changed. But the deeper they get pulled into New Dawn, the clearer it becomes that the demons still haunting Grace are very real, and Cade will have to risk everything to keep her safe . . . including his own life.

About The Author:
April blames her chocolate addiction on being born near the country chocolate capital in Hershey, Pennsylvania. When April's not busy raising her husband and two young children (yes, that's worded correctly), she can be found writing about her next brooding alpha hero and the woman who can easily bring him to his knees.
Posted by H. Wimmer at 12:00 AM