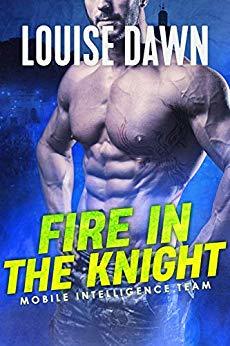 Review:
Louise Dawn is able to write a story of characters that readers will want to read more of.  The story works but is lacking the balance needed in Romantic Suspense series that readers need to find a complete story and connect with characters.
While this is the first in the series I have read I could be missing something the other two books had that would have had readers better connecting with characters.
The man and female lead work well together and the story flows well enough.
Thank you to Netgalley for a copy of Louise Dawn Fire In the Knight.

When Charlotte Quinn’s father passes away, she escapes her small town life. Taking a break from running their Wyoming farm, Charlie travels to Europe and Northern Africa with her dance group. But when an assault in Malta leaves her injured and scared, she turns to a fierce-looking family friend, a man who seems to despise her.

Dave “Donnie” Wilson knows all too well what it’s like to lose a loved one, and he can’t stop thinking about the farm girl who raises his blood pressure. When Donnie discovers the attack, the MIT2 Intelligence Specialist digs further and what he finds has him running to Charlie’s side.

With a ruthless assassin and hired killers chasing them across Morocco, will Donnie be able to exfil her in time? And will the lethal analyst be able to preserve the walls around his weary heart?

About The Author:
I  write fast-paced, gritty romantic suspense. I've lived an adventurous - sometimes harebrained - life in South Africa, the Middle East, and Utah. Thanks to numerous careers and escapades (Jill of all trades, master of some) I've been lucky enough to have traveled the globe.
I love to write about strong independent women and the men that support them. I try not to include any weak-ass protagonists in my books - if I ever do - you have permission to kick my typist bum. When I'm not writing about men whose beards smell of Cordite, I work as a Corporate Trainer in Utah.I love British Chocolate, and my little wigglebum 'British' Cocker Spaniel.
Posted by H. Wimmer at 12:00 AM