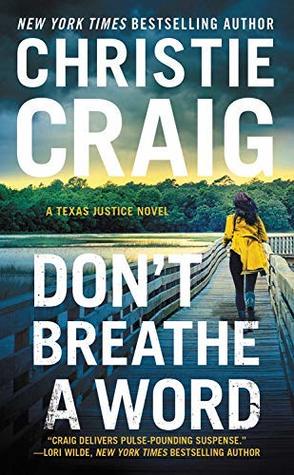 Review:
Don't Breathe A Word bring characters face to face with Juan Acsota and his painful past that drags him down keeping him from living this life.  Until his new neighbor arrives with a little girl and he has to come face to face with life and death.
The story starts off fast and than slows down quickly giving readers time to understand the action of the characters and their reactions to each other.
The story is about life, death, romance, and family.
Christie Craig is able to bring reader into her world holding the readers hostage until they have read every last work.
Thank you to Netgalley advance copy of Christie Craig Don't Breathe A Word.

Synopsis:
Police detective Juan Acosta doesn't only carry scars on the outside. He's filled with guilt and anger ever since his undercover job led to the murder of those he loved the most. Now he's living for one thing: revenge. That is, until Juan meets his beautiful new neighbor.Vicki Holloway prides herself on being capable and independent, but her life is turned upside down when her sister Sara is killed by an abusive ex. Fearing for the safety of her niece, Vicki and the little girl go into hiding...resurfacing in Texas with new identities.Juan finds his once-frozen heart thawing around Vicki, but he knows she's hiding something. Juan needs answers, but Vicki isn't talking. She has to keep her secrets if she wants to keep Bell safe, which means resisting her growing feelings for the sexy, scarred man next door. But when Juan's quest for justice brings danger to her door, divulging the truth might be the only thing that keeps her alive.

Pseudonym for C. C. Hunter.Photojournalist, Author and SpeakerChristie Craig, an Alabama native, is an award-winning, multi-published writer, multi-published photo journalist, motivational speaker, and writing teacher.. Her non-fiction articles and photography have appeared in almost three thousand national magazines. A Golden Heart finalist, and a finalist in more than fifty RWA-sponsored contests, she has gained a well-deserved reputation for writing romance fiction that has both witty humor and a suspenseful, sexy tone. Published by Silhouette in the 90s, she recently broke back into fiction in a big way, making four book sales in one day. Her seventh humorous single title romance novel, published by Dorchester, will hit the stands in June 2010. Her non-fiction book, co-authored by Faye Hughes, released September 08, is The Everything Guide To Writing A Romance Novel and their second non-fiction book, a humorous self-help relationship book, Wild, Wicked and Wanton: 101 Ways to Love Like You Are in a Romance Novel is scheduled to be released December 2010. Craig’s latest writing adventure is the sale of a young adult paranormal romance series, Shadow Falls Camp, that will be published by St. Martins Press in the near future.
Posted by H. Wimmer at 12:00 AM