Book Review: Lessons from the Set: A DIY Guide to Your First Feature Film, from Script to Theaters by Usher Morgan 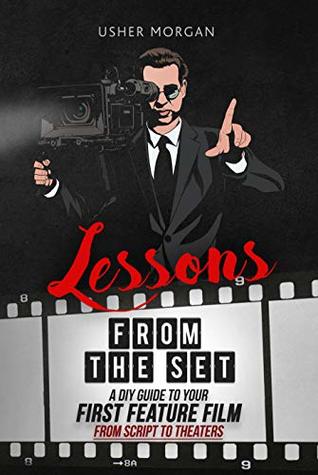 Title: Lessons from the Set: A DIY Guide to Your First Feature Film, from Script to Theaters

Review:
Usher Morgan isn't just writing a do it your self book but he is also giving you suggestions that future film writers might not have though of doing or tried but didn't quite go far enough.
The author expresses himself in a way that readers will be able to connect with as he works with readers though is book instead of face to face.
The authors way to writing encourages readers to find success and the author seem want the readers to find their own success as well. The best way to explain this book is Usher Morgan wants to see everyone who reads this self help book to succeed.

Thank you to Netgalley and the publisher Library Tales Publishing for a copy of Usher Morgan Lesson from the Set.

Synopsis:
Lessons from the Set is a comprehensive filmmaking guide that takes a cinephile’s “Do It Yourself” approach to low-budget indie film production and distribution. The book is peppered with filmmaking tips and tricks, as well as valuable, practical insight into the process of writing, directing, producing, and distributing commercial feature films on a low budget – whether you’re working with $1,000 or $1m. You’ll learn how to write, direct, produce, and release your film to theaters, tackle festivals and handle press, create a marketing plan, get reviews, and approach the filmmaking process with both an artistic soul and an entrepreneurial mindset. After releasing his debut feature film to wide acclaim, filmmaker Usher Morgan (Prego, Windblown, Pickings) decided to write a filmmaking book which detailed his approach to writing, directing, and producing his own work, as well as the steps he took to distribute and market his film, Pickings, and release it to theaters across the nation. Lessons from the Set: A DIY Guide to Your First Feature Film, from Script to Theaters is the perfect gift to any aspiring filmmaker, it’s an essential guide for anyone who wants to tell stories and make movies for a living.

An award-winning screenwriter, film director, producer and studio executive residing in New York City. I started my career in book publishing and later became involved with film production and distribution. Produced my first documentary film "The Thought Exchange" starring David Friedman and Lucie Arnaz in 2012, followed by my directorial debut, the award-winning short film "Prego."My first feature film, "Pickings" was released to wide acclaim and received a limited theatrical release via AMC Independent in March of 2018. My writing and directing style is influenced primarily by film-noir and spaghetti westerns. The Los Angeles Times calls me, "a talent to watch".
Posted by H. Wimmer at 12:00 AM