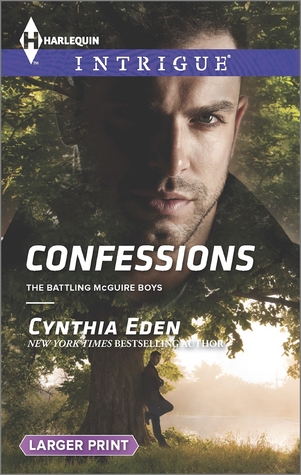 Review:
I love Cynthia Eden's novels because she has the ability to make you believe one things but at the last second pulls you into a different direction without skipping a beat. Characters are written with a purpose! I have found in the romantic suspense novels that some characters are written in only to be forgotten or killed, but Cynthia Eden makes sure everyone has a purpose from the attorney, to ex boyfriend even the cops standing around. Everyone has a reason and a purpose.

I have read her serial killer series that have kept me on edge biting my fingers and reading all night having to know who the killer is only to be completely shocked. I have read her Mine Series where you wonder if the hero is as twisted as the stalker or killer and now Confessions (The Battling McGuire Boys Book 1).

I have never been a fan of Harlequin Novels for the fact I thought the story was all about sex and the plot is secondary. However I have found their Intrigue books or at least Cynthia Eden books the sex is secondary to the plot.  Trust me there is hot sex in the book that will make a good girl blush but not nearly as bad as I have found in other Harlequin Novels.

This is a second chance story about Grant McGuire and Scarlett Stone high school sweethearts but when Grant joined the army he left Scarlet behind not wanting to hold her back in life. Ten years later Scarlett is accused of murder and goes to the only man who promised to always be there for her.  (Your typical Second Chance Love Story). With that being said this book adds in a twist, turns and a lot of introductions. The entire McGuire children, friends and decade old murder of their parents not to mention a burning house.

Cynthia Eden introduces 5 brothers and 1 sister to the story giving just enough information to understand how each brother will act and what they will do to protect each other. Even with the additional characters who will at some point have their own story the author keeps the story moving forward never missing a beat. The reader will finish Grant and Scarlett story wanting to keep reading the next book in the series because of the cliff hanger.

For a book just over two hundred pages this author crams a lot of information but smoothly keeps the reader reading never once getting lost.

Bottom line if you like the way Cynthia Eden writes then you will love this series.

Thanks Heidi for this review

Desperate to prove she’s being framed for murder, Scarlett Stone entrusts her reputation—and her life—to the man who once broke her heart. Grant McGuire, a sexy former army ranger turned detective, has never been the same since military action. But behind his cold demeanor, he still burns for Scarlett.

Taking her case is an easy but dangerous decision for Grant. Together they must race against the clock to find the real killer, who now wants them both dead. More dangerous, however, is their sudden, reignited passion. Grant will do anything for a second chance with Scarlett…while she’ll do everything to keep the secret she never wants him to know… 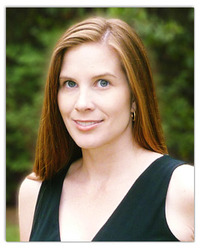 Author Information:  New York Times and USA Today best-selling author Cynthia Eden has written over thirty novels and novellas. She was named as a 2013 RITA® finalist for her paranormal romance, ANGEL IN CHAINS, and, in 2011, Cynthia Eden was a RITA finalist for her romantic suspense, DEADLY FEAR.

Cynthia is a southern girl who loves horror movies, chocolate, and happy endings. She has always wanted to write (don't most authors say that?), and particularly enjoys creating stories about monsters-vampires, werewolves, and even the real-life monsters who populate her romantic suspense stories.
Posted by Unknown at 12:00 AM