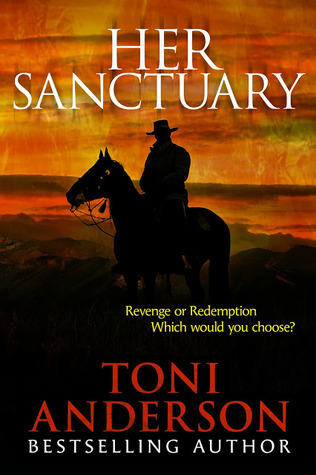 Title: Her Sanctuary
Author:  Toni Anderson
Stars 5 out of 5Review:This is the first book from Toni Anderson I have read and I will be honest I only read it because the book was free on Kindle. After reading the book I quickly bought her second book and plan on reading more by Toni Anderson in the future.  This book is a solid suspense novel with a slightly predictable ending your typical Happy Ever After. Elizabeth Ward is an FBI agent but when an op goes wrong she is now on the run from the mob because she feels the FBI can't protect her. She runs to a ranch in Montana in hopes of hiding from her past.  When she arrives at the Ranch she meets Nat Sullivan who is on the verge of losing his families ranch because of endless troubles from his sick mother to his boozing brother who can't seem to take care of his own daughter and a cow hand with a past.The author wrote a multiple characters suspense novel where we see each characters perspective and where they are at all times until the end of the book where each characters finds themselves in a deadly showdown. Toni Anderson made sure that each and every character written had a reason and a purpose to be in the book and no one was there just to carry on though her next novels. The author tried to show Elizabeth as human and not the perfect FBI agent but she painted her as the best sharp shooter and yet Elizabeth seem to trip over her own two feet all the time. She would forget her gun when she was reaching for it which lets face it if the Mob is after me I would have my gun on me all the time. I like Elizabeth but her past made it hard to see how she could have a future with Nat. I did have a little trouble with Nat because he did a lot of whiny but at the same time his mother is sick, his brother is a drunk and he is about to loose his ranch so I guess he has rights to whiny. The showdown at the end of the book has the reader dealing with blood shed but nothing you can't handle and I love Nat's reaction to the sell of his ranch as well.This book had its predictability but at the same time it was well written keeping me reading to the end of the book. I feel books that are predictable I can get past when they are well written like Toni Anderson's has done with Her Sanctuary. I plan to buy and read the next book in the series that will follow Josie and Marsh because that should be an interesting story. There is several sex scenes in this book between the different characters.  Found it free on Amazon - Thanks Heidi

Synopsis:   Running for her life, ex-FBI agent Elizabeth Ward escapes to Montana with a new identity. She craves peace and solitude, but instead finds handsome rancher, Nat Sullivan.
​
Nat is trying to hold his ailing family together, while struggling to keep the ranch from bankruptcy. The last thing he needs is a beautiful stranger reminding him there is more to life than work.
​
But Elizabeth isn't what she seems. And when a murderer and rapist track her down to the remote ranch, they all find out about the power of revenge.

Author Information:  Toni Anderson is a New York Times & USA Today best-selling author of Romantic Suspense. A former marine biologist, Anderson travelled the world with her work. After living in six different countries, she finally settled down in the Canadian prairies with her husband and two children. Combining her love of travel with her love of romantic suspense, Anderson writes stories based in some of the places she has been fortunate enough to visit.

Toni donates 15% of her royalties from Edge of Survival to diabetes research--to find out why, read the book!

She is the author of twelve books including Dark Waters, Dangerous Waters, and The Killing Game (2014 RITA® Finalist). Her latest release is the third book in her COLD JUSTICE series called Cold Light of Day
Posted by Unknown at 12:00 AM