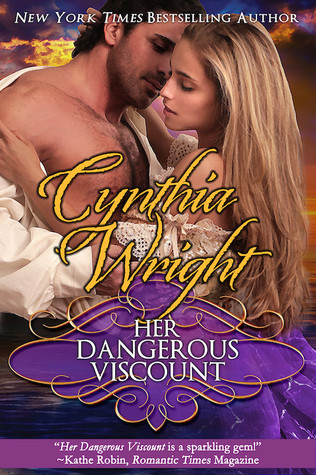 Review:   A regency romance of the first order. It starts out in France, moves to England, and ends in America. First published in 1990 under the title Natalya. It was revised in 2011 and published under the tile Her Dangerous Viscount. It had a pleasant story line and two strong characters in the main roles. A captured English Viscount, who was a Navy Captain, a beautiful American maiden who is living in France with family and this is in 1814. England is at war with France and the United States. The maiden wishes to return to America and the escaped hero wishes to get out of France and back to England. The join forces and escape. But once there circumstances compel the hero to go to America to right a wrong against him. He takes the maiden with him and returns her to her family. After the obligatory sex scenes they end up married. All and all a pleasant read.

I got the book from Amazon thru kindlebuffet.com.

I rated the book at 4 stars and would read other offerings by this writer. This book is part of the Rakes & Rebels series.

Thank you Frank for this review.

The year is 1814 and Grey St. James has escaped from Napoleon’s prison on the rocky isle of Mont St. Michel. Desperate and dangerous, he is a far cry from the rakish nobleman who had broken hearts in Regency London.

In a chateau high above the romantic Loire River, Natalya Beauvisage is writing her second novel. At 26, she is beautiful but hardly marriageable and that suits her, for she plans to devote herself to her career as a novelist. The men in Natalya’s books do her bidding… but when a dark, threatening stranger appears at the chateau and holds her at knifepoint, she discovers a potently attractive real man who is completely beyond her control.
Grey needs to escape from France and Natalya longs to return to America at a time when war made sea passage perilous, so they form an unlikely alliance. Dangerous adventures await them as they journey together, attempting first to elude Napoleon’s henchmen and then to travel on to London, where Grey must confront shocking changes in his life.

As they grow closer, Natalya is caught up in a passionate fantasy that surpasses any she could imagine. But Grey’s heart is imprisoned by dark secrets, and not until he has delivered her to her Philadelphia home does that mystery begin to unravel...

“With the same magic, sensitivity, and humor that has made CAROLINE a classic historical romance, comes NATALYA, a beguiling love story at once poignant and funny. This is a sparkling gem!” Kathe Robin, Romantic Times

“Cynthia Wright is back! Are you in for a great read.” New York Times Bestselling Author Catherine Coulter

Author Information:  My career as a novelist began when I was twenty-three, with a phone call from New York announcing that CAROLINE would be published by Ballantine Books. Can you imagine my excitement? I went on to write 12 more bestselling historical romances set in Colonial America, Regency England & America, Medieval England & France, and the American West.

My novels have won many awards over the years, but what means most are readers' messages like this one: "When I read your books, I can't wait to turn the page, but never want the story to end." It's been a thrill to have all my novels published as eBooks (newly edited, with gorgeous new covers!), and I have also released an all-new Raveneau Novel, TEMPEST! I am currently working on a romance set in Cornwall in 1798 called SMUGGLER'S MOON.