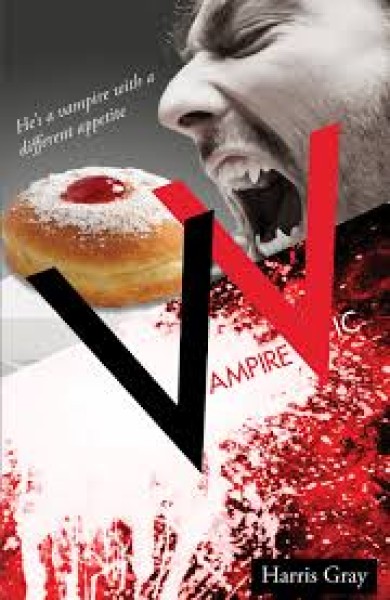 Would you give up donuts…for blood?
Fat, balding accountant Victor Thetherson hoped becoming a vampire would turn his life around. But Victor can’t stomach confrontation and gets queasy at the sight of blood. Instead he gets it from the blood bank, diluted in bloody Bloody Marys. The result: a vampire who doesn’t bite, and a man who gets no respect.
Victor’s slacking staff mockingly calls him Vampire Vic. Victor’s boss amuses his wife by intimidating Victor on video. His ex makes him stay out late while she entertains boyfriends in the house she insists they continue to share. One night it finally boils over, and Victor bites someone. And then another…and very soon, he’s no longer visiting the blood bank.
Muscle replaces fat, and his comb-forward widow’s peak takes root. Victor basks in newfound attention and respect, at the office and at home. But real vampires get hunted, and as the transformation reaches the tipping point, Victor must decide how much he’s willing to sacrifice for the power of the vampire.

Harris Gray finish their third pint and mull over their next writing project, simultaneously deciding on a vampire book. Because the women in their lives eat up every vampire story on the shelves. And for the gratuitous T&A. But hunky, smoldering vampires are beyond their grasp; and dammit, T&A should mean something. Deciding to write what they know, Harris Gray return to their wheelhouse: An aging, uncomfortable man, not so happy with his lot in life. A man bitten by a vampire, unsure what to do with his new…skillset. Vampire Vic – VV – is born. Perfect.
The latest book is Vampire Vic.
WEBSITE | FACEBOOK | TWITTER
—————————————————————-