Book Review - We Learn Nothing: Essays and Cartoons - Tim Kreider 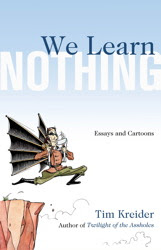 Review:  We Learn Nothing is a collection of essays about a man growing up.  Tim Kreider is a political cartoonist (who definitely leans liberal) who spent his youth stridently convinced of his position and opinions.  But as life happens, as it does to all, he learns that the black and white of youth gives way to gray.
In the essay Escape from Pony Island he learns there is a limit to his political convictions.  A good friend becomes fully committed to the Peak Oil movement and with relentless passion tries to influence all his friends.  Ultimately he must let the friendship go and the heartbreak is palpable.  On the other hand in Chutes and Candyland he discovers new depths to his empathy and friendship as he helps nurse a good friend through a male to female gender reassignment surgery.  It is one of those life events we assume we will never experience, but when presented with it Tim stepped up and was there for his friend.
Throughout the book we get glimpses of both the man Tim was and we can also see who he is becoming, reiterating that we are all on a journey to find our true selves.  Every day is an opportunity to be our true self.  In Sister World Tim learns who his biological mother is and discovers he has two younger half sisters.  This allows him to be the brother again and fix the mistakes he made with his own sister.  Not often do we get a chance to revisit the past so directly, to be given a cosmic redo.
I really liked Reprieve, in which he documents being stabbed in the throat as a younger man.  The story is great on its own, but I like the great truth he puts in his accompanying cartoon about it (did I mention he is a cartoonist?).  When we tell stories we always change and shape them for entertainment purposes, much like a stand up comedian honing their act down to just the right words for the biggest laugh.  Truth, like memory, is extremely malleable.
This collection has two things really going for it, Kreider is both brutally honest, about himself and others, and he is extremely funny.  If you have never tried essays before this is a fantastic place to start.

Synopsis: In We Learn Nothing, satirical cartoonist Tim Kreider turns his funny, brutally honest eye to the dark truths of the human condition, asking big questions about human-sized problems: What if you survive a brush with death and it doesn’t change you? Why do we fall in love with people we don’t even like? What do you do when a friend becomes obsessed with a political movement and won’t let you ignore it? How do you react when someone you’ve known for years unexpectedly changes genders? Irreverent yet earnest, he shares deeply personal experiences and readily confesses his vices— betraying his addiction to lovesickness, for example, and the gray area that he sees between the bold romantic gesture and the illegal act of stalking. In these pages, we witness Kreider’s tight-knit crew struggle to deal with a pathologically lying friend who won’t ask for help. We watch him navigate a fraught relationship with a lonely uncle in jail who—as he degenerates into madness— continues to plead for the support of his conflicted nephew. And we cringe as he gets outed as a “moby” at a Tea Party rally. In moments like these, we can’t help but ask ourselves: How far would we go for our own family members, and when is someone simply too far gone to save? Are there truly “bad people,” and if so, should we change them? With a perfect combination of humor and pathos, these essays, peppered with Kreider’s signature cartoons, leave us with newfound wisdom and a unique prism through which to examine our own chaotic journeys through life. Uncompromisingly candid, sometimes mercilessly so, these comically illustrated essays are rigorous exercises in self-awareness and self-reflection. These are the conversations you have only with best friends or total strangers, late at night over drinks, near closing time. 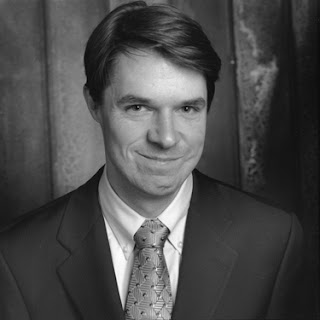 Author Biography:   Tim Kreider’s work has appeared in The New York Times, Film Quarterly, The Comics Journal, and Nerve.com. His popular comic strip The Pain—When Will It End? ran in alternative weeklies and has been has been collected in three books by Fantagraphics. He divides his time between New York City and the Chesapeake Bay area.
Posted by Unknown at 12:30 PM