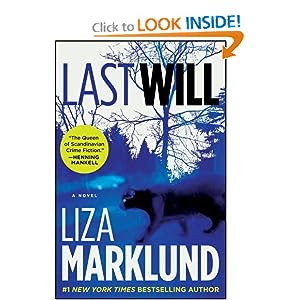 Review:  All the excitement of the cutthroat world of modern scientific research.  I know that statement sounds silly, but Liza Marklund through her investigative journalist Annika Bengtzon brings the tension of the world alive.  When you are talking millions of dollars of research grants floating around, you are going to bring out the worst in a lot of people.

The mystery was solid, Nobel prize committee member is assassinated during the after party of the awards ceremony.  Who did it and why?  Annika, who was literally dancing next to the victim, was the best eyewitness.  Immediately she receives a gag order from the police, but that doesn’t stop her from digging into the case.

I do not think most people realize how much money is floating around the research world if your work is successful, and more importantly, first.  Put any random group of people in a situation wherein being first is the difference between wealth and poverty, you are going to see some dirty tricks.  Watch any reality show like Survivor and you will see the same behavior.  Having a PhD. will not make you play any nicer at all.  It makes you all the more nasty because you at least understand exactly what is at stake.

Liza Marklund has given us another solid Nordic Noir series featuring a compelling heroine.  Waiting for these books to be translated is sheer torture, it almost makes me want to give a try at learning Swedish.

Why I Read It:  Sent by the publisher for review.

Synopsis: HOW FAR WILL A MADMAN GO TO ATTAIN THE ULTIMATE PRIZE? In the midst of a brutal Scandinavian winter, a member of the Nobel Prize committee is gunned down in the city of Stockholm. Reporter Annika Bengtzon, who made eye contact with the killer just seconds before the shots were fired, is the key witness. Because of the sensitivity of the crime, police issue a gag order on her immediately—and she is forced to figure out on her own why an American assassin known only as “the Kitten” ordered the hit. With her marriage falling to pieces and her job on the line, Annika quickly finds herself in the middle of a violent story of terror and death, the roots of which date back centuries. The research all leads her to the same man: a rich and famous industrialist responsible for one of the world’s most coveted gifts, who died a tragic and mysterious death. If Annika wants to learn the truth, she risks uncovering secrets that some will do anything to protect.

Liza Marklund was born in 1962 in the small village of Pålmark, close to the Arctic Circle in Sweden. She is an author, journalist, columnist, and goodwill ambassador for UNICEF. She is also co-owner of Piratförlaget, one of Sweden’s most successful publishing houses. Since her debut in 1995, Liza Marklund has written eleven novels and two nonfiction books. Liza co-wrote the international bestseller The Postcard Killers with James Patterson, making her the second Swedish author ever to reach No. 1 on the New York Times bestseller list. Her crime novels featuring the gutsy reporter Annika Bengtzon have sold more than 13 million copies in 30 languages to date.

Liza Marklund worked as an investigative news reporter for ten years and as an editor in print and television news for five. Today, she also makes documentaries for television and writes for various newspapers. Her topics are often women and children’s rights. Liza has made documentaries about children with HIV/AIDS in Cambodia and Russia, and a series about domestic violence, Take a Little Beating.

Liza is also a popular columnist since 20 years. Her columns have appeared in various Swedish and international newspapers and magazines, including Financial Times in the UK, Welt am Sonntag in Germany, Dagbladet Information in Denmark, and Ilta-Lehti in Finland. She is a regular columnist in Swedish tabloid Expressen and Norwegian daily Verdens Gang. Today, Liza and her family divide their time between Stockholm in Sweden and Marbella in southern Spain.