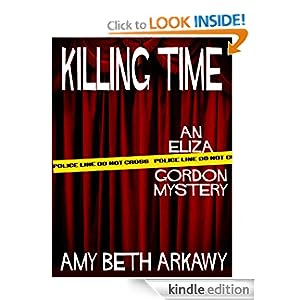 Title:  Killing Time:  An Eliza Gordon Mystery
Author: AmyBeth Arkawy
Review:  I enjoyed this mystery and meeting the quirky characters that live in the little town of Goodship.  Eliza is likeable and you really feel for her with the loss of her husband of only 3 years.  The business they built is going strong and she is really finding her home and where she belongs in this little town.  Her friends and acquaintances are a good mix of strange yet quite real in their personalities and idiosyncrasies.  You know you have met people just like the ones in this book; you may even be one of them.
The book felt a bit like Murder She Wrote, I Love Lucy, and Rosemary and Thyme(BBC).  Solving a crime with just a bit of information and a mind that wouldn’t let Eliza rest, all the while pulling in a good friend or two to help her.  If you enjoy light mysteries (like a cozy) with a bit of comedy and hopefully in the next few a bit more romance then I think you will find this book to your likein’.
I look forward to the next one in this series.
Publisher: Hen House Press (November 2, 2011)
Copyright: 2011
Pages: ebook
ISBN: 9781937890
Quick Review:  4 Stars out of 5.
Where I Obtained the Book: Sent by the publisher for review.

Synopsis: Welcome to Goodship, New York. The sleepy suburban hamlet harbors a terrible secret. A secret that may be at the heart of two murders.  Twenty-five years after the “big game” and the requisite homecoming party, Goodship's secret begins to haunt its otherwise comfortable residents. When the first murder is reported, the townsfolk are warned, but take no action. When town landmarks are vandalized, residents are aghast. And, when an attempt is made on a local hero's life, the town mobilizes, especially former soap star(and now proprietor of the favorite lunch spot) Eliza Gordon and her pal and local radio personality Midge Sumner. When the prime suspect turns up dead, Eliza and Midge mobilize to solve the murders and catch the real perpetrator. The clues are all there. Fans of "Murder She Wrote," Leslie Meier's Lucy Stone mysteries and Laura Lippman's Tess Monaghan series will enjoy following the clues and taking their best shot at helping Eliza Gordon figure out: “Who is doing more in Goodship than just Killing Time?”

Author Biography:  Amy Beth Arkawy is the author of several plays including: Psychic Chicken Soup; Full Moon, Saturday Night; Listening to Insomnia: Rage Amongst Yourselves; Crazy Vivian Doesn’t Shop at Bloomie’s Anymore; The Lost Mertz and The Postman Always Writes Twice. Her work has been produced in New York City and across the country and featured in several anthologies.
She is also a creativity coach/writing teacher, freelance journalist and radio talk show host. Her story “Dangerous Appetites” is featured in the collection, "Fiction Noir:Thirteen Stories" also by Hen House Press. "Killing Time" is the first in the Eliza Gordon mystery series. She is at work on the second.
Other Reviews:
Joey Pinkey
Amazon
Posted by Unknown at 1:38 AM