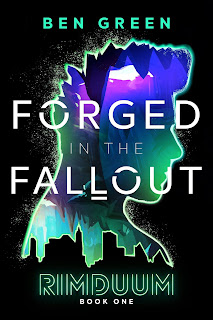 Forged in the Fallout - A bit about me - skip to the next paragraph for the review. I teach 9th grade ELA and I love to read young adult books regularly. I am always looking for new books to read so I can suggest them to my students and especially my more reluctant readers. We have a book walk at the beginning of each semester where I introduce my favorite books to the class as they each need an independent novel to read. I cannot keep introducing the same books, so I read a lot of young adult books. I also was a book review blogger for many years. With that out of the way here is my review.
I was not sure what to expect from this book, but I was pleasantly surprised by how much the story drew me in.
The book moves quickly about ½ way through chapter 1 and I did not once get bored thinking it was too long or slow.
Clayson, the main character, is confused and a bit scared as his father has not told him about his real family or who he is. Instead, he is thrust into a world of danger he never imagined or dreamed of. Rugnus, a young friend of Clayson’s father, has to be one of my favorite characters as he is down to Earth and real about his life and his job to protect Clayson. He takes his responsibility very seriously and yet he can let himself and Clayson enjoy a bit of life along the way.
Family drama is strong as Clayson is meeting his mother and sister for the first time in this book.
His sister, Andalynn, is a feisty character who wants to be the boss, but still would like some guidance along the way. She is strong and yet a bit scared when things do not go as planned.
His mother plays a small part in this book and I hope to find out more about her in the next book. You will meet her in this book, but she is not a main character yet. Clayson’s father is someone I would like to know in real life. He was reluctant to tell Clayson who he was as he wanted him to become who he was meant to be not someone he had to be. Also, he wanted to protect his son as long as he could thinking he had more time than he did. He makes the best of life even with the struggles he has and puts his son first along with his commitments. He is heard whistling as he is about to embark on a dangerous mission allowing the reader a glimpse into who he is and how life is what you make of it in the end.
This is a young adult book as the characters are young 14-18 and the story revolves around them and how they plan on making things better in this world. Clayson tries to fit in with the people he meets, as he does not want anyone to know he is from the surface. Clayson is learning as he goes along and finding his strengths and his weaknesses. He is not a perfect character with all the bells and whistles, but instead, he is flawed and ‘normal’. He is on a hero’s journey with the help of those he meets and befriends. Along the way, you meet other characters that can either help or hinder Clayson on his quest. Life for him is a surprise around every corner and behind each smiling face.
Ben Green has created a whole new world for his readers to explore. One of fantasy and reality along with life choices and consequences some good some bad. A dystopian world where past wars have wreaked havoc and changed people forever. This book is imaginative with so many things to easily visualize with the vivid descriptions the author writes so well. A full-fledged movie was playing in my head as I read this book. Green’s descriptions make this world come to life even in the dark spaces. Shadow and light fight in this book for control. Who will ultimately prevail? I hope the light where Clayson and his friends’ dwell most of the time.
Take the time to read this book as you will not be disappointed. Especially if this is your genre of choice.

This genre-bending series takes you deep under the Rocky Mountains into the sci-fantasy kingdom of RIMDUUM. A world filled with neon dreams and nuclear magic. A coming-of-age dystopia centered around dungeons, family, and dangerous secrets—with all the young adult cyberpunk feels and plenty of action-adventure to keep you turning the pages.Clayson Spangler turned fourteen a couple of days ago—maybe. His father keeps the exact date under a mountain of secrets. But secrets have a way of getting out.On a tranquil evening in the Appalachians, Clayson's solitary life crashes into his family's impossible past: a kingdom under the Rocky Mountains; his mother enchanted to forget her own son; strange metal objects filled with magic; and his father’s most dangerous secret—mithrium—a metal strong enough to level cities.Now, Clayson’s father is on the run, his mother is on trial for treason, and Clayson is ordered to hide in the last remaining safehold—Tungsten City. To stay out of danger, he’ll need help from his new friend, Rugnus, a master of elemental magic, and Andalynn, the sister his father had kept hidden from him.But after years of secrets, Clayson won’t stand by as a world of enemies—both known and unknown—threatens to eradicate his family and ignite a war between the last two cities deep under the Rockies in the Kingdom of Rimduum.

BEN GREEN has always been a storyteller. When he was a kid, he would tear apart his coloring books and assemble them into crossover stories with lots of drama and lots of glue. Then he discovered action figures and took to burning Cobra agents at the stake and writing whole episodes of Star Trek the Next Generation. As a teen, he wrote Star Wars fanfiction and began creating his own worlds on a Brother word processor with a tiny screen and floppy disks. Meaning he’s also very old.Though he grew up in Arizona and Nevada, Ben now lives in southern Minnesota where he puts his degrees in teaching, history, and technology to use as a social studies teacher for non-traditional students. He is passionate about teen issues and at-risk youth. This may be why he spends so much time with his four children, telling stories, working in the garden, and encouraging them to find something to be passionate about.